Kobe Bryant has been fined $100,000 by the NBA after cameras caught him yelling a homophobic slur at a ref. 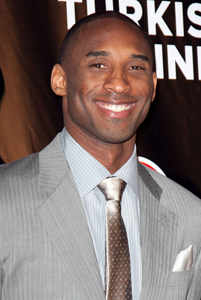 Kobe Bryant learned the hard way that NBA officials are excellent lip readers. The LA Lakers star player has been hit with a huge fine after being caught on camera yelling a homophobic slur at a ref.

Here’s how it went down: After Kobe was hit with a technical foul he screamed for the ref and appeared to say “F-ing f-got.” Although the broadcast didn’t pick up the audio, the words were clear to even the most untalented lip readers.

Even the announcers knew what he was saying — one immediately remarked, “You might want to take the cameras off him right now, for the children watching.”

The gay community is not amused. The Human Rights Campaign told TMZ, “What a disgrace for Kobe Bryant to use such horribly offensive and distasteful language, especially when millions of people are watching.”

The group added, “Hopefully Mr. Bryant will recognize that as a person with such fame and influence, the use of such language not only offends millions of LGBT [lesbian, gay, bisexual, transgender] people around the world, but also perpetuates a culture of discrimination and hate that all of us, most notably Mr. Bryant, should be working to eradicate.”

Kobe has apologized for his outburst, saying, “What I said last night should not be taken literally. My actions were out of frustration during the heat of the game, period.”

He adds, “The words expressed do not reflect my feelings towards the gay and lesbian communities and were not meant to offend anyone.”

But that’s not good enough for GLAAD. The powerful gay rights group said Kobe’s apology was nice and all, but does nothing to change the culture of homophobia prevalent in most professional sports.

“No matter the intent, slurs like this fuel intolerance. The NBA has a chance to show leadership by taking disciplinary measures and sending a message that words like this have no place in sports. All sports leagues have a responsibility to create a safe environment for fans, employees and players.”

“While I’m fully aware that basketball is an emotional game, such a distasteful term should never be tolerated. Accordingly, I have fined Kobe $100,000. Kobe and everyone associated with the NBA know that insensitive or derogatory comments are not acceptable and have no place in our game or society.”

Kobe stands by his apology and says he plans to talk to gay rights groups to make amends — but he will appeal the fine.