Diane Lane, who will play Clark Kent’s mother in the Superman reboot, says the script is so top secret she was only allowed to read it once! 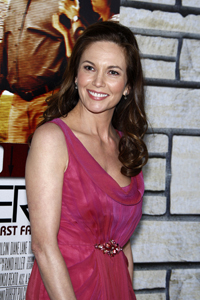 Diane Lane says the Superman project is very hush-hush — so much so that she, one of the movie’s stars, was barely even allowed to read the script before signing on.

“I read the script under lock and key,” the actress told E! Online. “I was locked in a room with the script and was only allowed three hours with it.”

So is it any good?

“I nailed it into my memory. I’m really excited. I’m really not allowed to talk much about it, I think, but it does cover the entire range of years, from infancy on,” she explained.

Who else will we see in Superman? The ever-yummy Brit Henry Cavill will don the tights in the role Christopher Reeve made famous. Academy Award-nominated actress Amy Adams will play Lois Lane — wonder if she’ll dye her famous red tresses black for the role? Kevin Costner will play Clark Kent’s father.

Look for Diane Lane in Superman on the big screen in December 2012. Can’t wait that long for your Lane fix? She also stars in Cinema Verite as the mother of the first reality show family, the Louds of PBS’ 1973 hit An American Family, out this month.

read on for more superman