Sally Field is joining the cast of Lincoln as Mary Todd Lincoln. 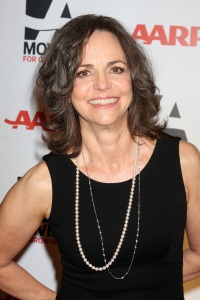 Sally Field is stepping out of her Brothers & Sisters role and into the world of Lincoln.

Sally Field is slated to play Mary Todd Lincoln in Steven Spielberg’s upcoming movie obviously titled, Lincoln. Field will star opposite Daniel Day-Lewis who is stepping into the big hat of Abraham Lincoln for the biopic.

According to Steven Spielberg, there was no other option but Sally Field for the role of Mary Todd Lincoln. He recently told The Hollywood Reporter that she was his “first choice to portray all the fragility and complexity that was Mary Todd Lincoln.”

Lincoln is based on Doris Kearns Goodwin’s 2005 book Team of Rivals: The Political Genius of Abraham Lincoln.

The film is on schedule to start filming in the fall and has a tentative 2012 release date. But don’t expect it too early in the year. The film isn’t expected to hit the big screen until sometime in the fourth quarter.

Are you excited to see Sally Field and Daniel Day-Lewis step into the shoes of the famous presidential couple, Mary Todd Lincoln and Abraham Lincoln? Somehow we think that with Steven Spielberg’s touch, the movie Lincoln could be an exciting picture for 2012. Tell us what you think, we want to know.