Russell Brand is joining Tom Cruise and Julianne Hough for a rocking good time in the movie version of Rock of Ages. 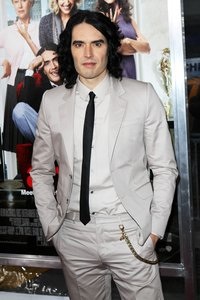 Russell Brand is everywhere these days, folks, and he isn’t slowing down. Everyone’s favorite Brit comedian and big screen actor is joining the ranks of Tom Cruise and Julianne Hough for the movie version of Rock of Ages.

Rock of Ages director Adam Shankman confirmed the big news via Twitter. “I can officially announce Russell Brand as your Lonny in #rockofagesmovie!”

Get excited Russell Brand fans! Shankman is already preparing to give fans a special treat in the form of the funnyman’s hair: “I see a mullet in his future…maybe a Nikki Six?”

Russell Brand’s movie status is climbing in popularity and Rock of Ages could only help. His two most recent features, Hop and Arthur, put the actor high on the box-office charts at the same time. How’s that for leading-man status?

Brand’s character Lonny doubles as the story’s narrator and owner of a rock club. After his unforgettable performance as Aldous Snow in Forgetting Sarah Marshall and Get Him to the Greek, we can’t wait to see what he brings to Rock of Ages.

Rock of Ages begins filming in Miami in May. Are you ready for Rock of Ages to hit the big screen or do you enjoy it better on stage?