Elisha Cuthbert stars in the much buzzed-about ABC comedy Happy Endings, a show that has been compared to Friends. Did it live up to the hype?

Related story Happy Endings movie: Where the show left off and what needs to happen next

Elisha Cuthbert plays Alex, a girl who leaves her boyfriend Dave (Zachary Knighton) at the altar, in the new ABC sitcom Happy Endings. The tight-knit group of six young adults (hence the Friends comparisons) has to deal with choosing sides and awkward relationship moments. 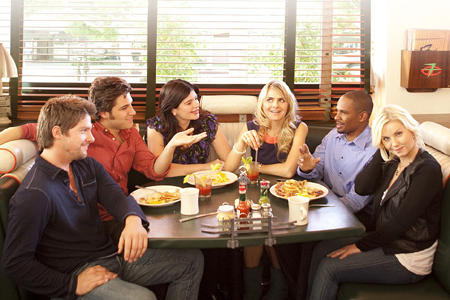 “I’m used to seeing what you see — every other thing that’s out there,” Cuthbert told the Toronto Sun. “But there are some surprises here in the sense that the characters (in Happy Endings) go in different places. And the comedy is a lot edgier than I anticipated. I really want people to hang in. We have to set up some stuff in the pilot, obviously. But episodes two, three, four, it just gets better and better.”

“As the episodes progress it’s almost the opposite of what you’d expect, which is that the guy who was left at the altar would be in shambles and my character would be running the town,” Cuthbert says. “You would assume that if she’s the one leaving, she would want freedom. But you’ll start to discover that her reasons for leaving are a little deeper.”

So far, the reviews of the show have been mixed, with one viewer saying, “I found myself watching, was intrigued, and enjoyed it. I think I’ll add it to my Tivo,” and another saying the show relied on “so much fat-hate! Haven’t shows like Modern Family proven that we are more sophisticated than fat-hate?”

Tell us: Did you watch Happy Endings? What did you think?