January Jones is on the cover of this month’s W and talked to the magazine about her modeling past, the paparazzi and who she really wanted to play on Mad Men. 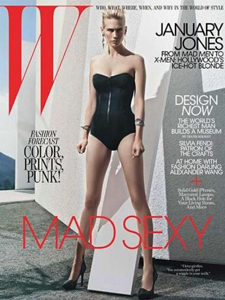 January Jones plays Betty, the ice queen ex-wife of Don Draper, on the hit show Mad Men — but that wasn’t the original plan.

“There was no Betty in the pilot when I auditioned,” Jones says in this month’s edition of W. “Matthew Weiner, the creator of the show, had no intention of showing Don Draper’s home life. I read for Peggy two times; it was between me and Elisabeth Moss, who eventually got the part. At the end of the scene, there was a casual mention that Don was married. Matt went home that night and wrote two scenes that featured Betty. I auditioned a couple of days later, and he made me a verbal promise that the character would grow. I took the part on faith; there was no script or fleshed-out character or Betty plotline.”

“I don’t judge Betty or necessarily understand her. The audience is passionate about her. After season one they wanted her to speak out against Don and his infidelities. Then in season two, when she did, there was a huge reaction against Betty. They want her to talk; just not too much.”

Jones also says that her past as a model has helped her handle her new life as a TV star. “In modeling,” she said, “the criteria is purely aesthetic. So when I got to L.A., I didn’t care if they said I was too small, too blonde, too pretty, or not pretty enough.”

One member of Jones’ entourage who loves the fame? Her dog.

“The paparazzi are lining my street, waiting for me to come out of the house,” Jones said. “And I’m always doing the same thing: Walking the dog. My poor dog is getting to know all the photographers. I say to him, ‘Why aren’t you barking?! These aren’t your friends.'”

Hollywood: It’s a dog’s life, after all.

Mad Men will return with new episodes in 2012.