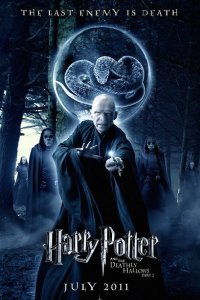 BAFTA award-winning documentarian Morgan Matthews got the story behind Harry Potter and the Deathly Hallows Part 1 and 2!

“He went behind the scenes and had incredible access to talent and crew and made a documentary,” Potter producer David Heyman told MTV News. “[It] shows the challenges of making the films, the tolls it takes on not just actors and crew. What I like is it’s not pure gloss and everything’s happy. It’s real and I think people will really enjoy that.”

Heyman also reveals the documentary, which isn’t yet done or titled, has some funny moments, like the one where Daniel Radcliffe loses about $20 on camera. “Morgan comes in to interview Dan in his dressing room, and Dan says, ‘Will you wait one second? I want to watch the 2:50 at Doncaster,’ which is a horse race. He says, ‘Yeah, I bet on it.’ ‘How much?’ ‘Ten quid.’ The horse, of course, comes in way behind the pack.”

Harry Potter and the Deathly Hallows docu-maker Matthews has several heady documentaries under his belt, including The Fallen, a three-hour film remembering British servicemen and women who died while serving in Afghanistan and Iraq, and Scenes from a Teenage Killing, which chronicles every teenager who died as a result of violence in 2009 in the UK.

The final installment of the Harry Potter franchise is expected to be a very dark journey, but compared to Matthews’ past projects, taking the behind-the-scenes journey with the cast and crew certainly marks a change of pace for him.

In addition to what Matthews was able to grab and use for his film, the Harry Potter producers also have ten years of behind-the-scenes fun to play with, so what doesn’t make it into the documentary will surely make it out to Potter fans.

“It was a very well-documented production,” producer David Barron told MTV News. “We had a crew filming behind the scenes for the entire production, which is unheard of — and that’s been for all the films. There is material, and we’ll see how it’s used. I’m sure Warner Bros. will package it in some form or another.”

A leaked peek was bouncing around the net this week, but Warner Bros. put the kibosh on that. You’ll have to pick up your own official Harry Potter and the Deathly Hallows Part 1 on DVD/Blu-ray Friday, April 15 to catch a glimpse of that opening scene… or stay tuned till SheKnows gets ahold of it!