Charlie Sheen is desperately trying to get back his peach gig on Two and a Half Men. Will producers go for it? 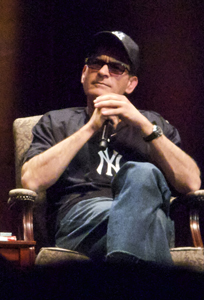 Charlie Sheen may be crazy but he isn’t stupid — the actor finally figured out that his $1 million per episode paycheck from Two and a Half Men was nothing to sneeze at, and now he wants his job back.

Problem is, we’re pretty sure he burned that bridge. And spit on it. Then doused the ashes with gasoline and burned it again. Then scattered the ashes to the four corners of the earth.

In other words, it ain’t gonna happen.

Despite Charlie’s pleas during his weekend tour dates, and despite what he told Boston’s Sports Hub radio station Tuesday night, sources close to Two and a Half Men say Charlie is definitely persona non grata.

“I was asked not to divulge anything,” Charlie said of his supposed talks with executive producer Chuck Lorre and CBS exec Les Moonves, talking about it anyway.

But production sources told TMZ that nothing could be further from the truth. “Absolutely false,” said the source. Warner Bros and CBS want nothing to do with this warlock.

By the way, Charlie says he has been acting like a deranged lunatic for the entire run of the show and doesn’t understand why it suddenly became a problem.

“Had they told me at the end of season eight that that behavior wasn’t going to be cool, I would have adjusted it,” he said.