Taylor Lautner takes on a new sort of hero in his upcoming movie, Abduction, and his costar and rumored real life romantic lead, Lily Collins, promises we’ll see a whole new side of the Twi-hunk in the fall flick. 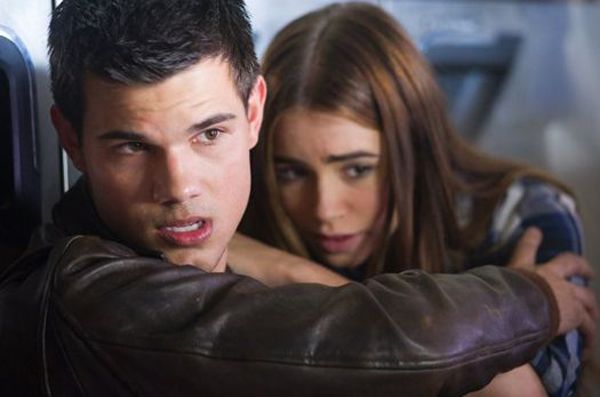 “Not Jacob anymore. Very Jason Bourne-esque, of course with his own twist on it,” Lily Collins (The Blind Side) told MTV. “It’s a complete departure from Jacob. Obviously I’m in the movie so I’m biased, but I think it’s going to completely shock his fans, and people that necessarily don’t know him very well as Jacob that aren’t Twilight fans. I think he brings an aspect people haven’t seen yet and it’s very, very exciting.”

The John Singleton thriller centers around Lautner’s character, Nathan, a teen who finds his own face on a website devoted to missing children. Nathan is forced to go on the run, while uncovering his dangerous family secrets with the help — or hindrance? — of FBI agents Frank Burton (Frank Molina) and Sandra Burns (Antonique Smith).

Collins plays his sexy sidekick. “We’ve got some awkward past that’s alluded to,” she said. “We tend to avoid each other in high school and we’re thrown together for a school project. Because I’m associated with him for the project, I then have to go on the run with him. There is romance, but it’s also partner in crime kind of thing.”

Perhaps the biggest shock to Twi-hards will be that Lautner will not be working those famous abs in Abduction. “That is very minimal,” Collins said. “It’s not about him taking his shirt off, this movie. There’s a lot more that I think makes up for that. That’s not to say that there’s not some steamy moments in the movie.”

Abduction is set to hit theaters September 23, 2011, but you can get your first glimpse tonight, Wednesday, April 13, on the special MTV First: Taylor Lautner. The sneak peek is at 7:56 p.m. on MTV and MTV.com, and will be followed by a 30-minute chat with the Twilight hunk on MTV.com.