Hayden Panettiere has revealed the one thing she says everyone wants to know about her: How she has sex with her gigantic boyfriend. 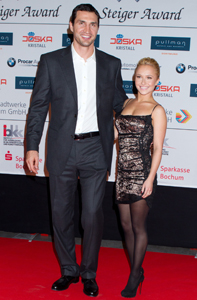 Standing at 5-foot-1, Scream 4 actress Hayden Panettiere is just a little itty bitty thing. Her boyfriend, Ukrainian heavyweight boxer Wladimir Klitschko, is a gigantic 6-foot-6. So how do they do it? No really, how do they do it?

Hayden revealed to Ellen DeGeneres that that very question is the one thing people ask her more than anything.

“He is quite a bit bigger than me,” said the 21-year-old former Heroes star of her 35-year-old boyfriend.

“I get the prudest people coming up to me and they’re like, ‘Does it work?’ Yeah, it works. We find a way.”

“Where there is a will, there is a way!” Panettiere told Ellen. “[The people who ask me how sex works with my boyfriend] are very conservative people most of the time but that just have to know,” she explained. “Like, ‘I have to know, I just have to ask you this question. I’m really sorry but…'”

Ellen was dumbfounded that anyone would ask such a personal question. “I know what you’re talking about, but I’m in shock!” she said, calling such a line of questioning “crazy and rude.”

Hayden doesn’t care. “I don’t mind it,” she added.

Panettiere has a penchant for older men: She started dating Klitschko, who is 14 years her senior, after her 2009 breakup with her 33-year-old Heroes costar Milo Ventimiglia.

read on for more hayden panettiere