Jamie Oliver is in Los Angeles, but he has not gone Hollywood. After his successful run with Jamie Oliver’s Food Revolution in Huntington, West Virginia, Oliver sought to tackle the big boys in an effort to change the way our children eat — in school and in turn, at home.

Jamie Oliver is proud to present season two of his Jamie Oliver’s Food Revolution that premieres April 12 at 8 p.m. on ABC. 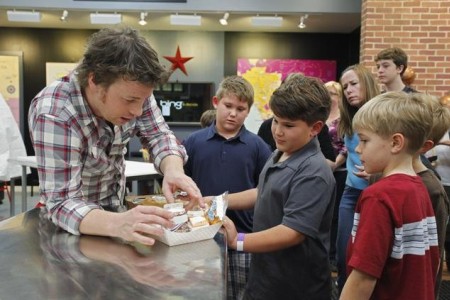 SheKnows caught up with Oliver as he discussed the supreme challenges of coming to Los Angeles. For one, the school board banned him from working in the schools’ kitchens and cafeterias. Oliver had to go guerilla in order to accomplish anything and get out his message of changing the way our kids eat. The entire effort is chronicled in the Emmy-winning show with tonight’s premiere.

SheKnows: After the success of last year’s Jamie Oliver’s Food Revolution in West Virginia, why did you jump to the second biggest city in America with Los Angeles?

Jamie Oliver: The theory behind LA was that last year, the response was so epic, we got an Emmy. People were turning in and they stayed and watched it through to the ending. We wanted to go with that. Time is of the essence. At the heart of this show, really, the heart is telling the story of how everyone has the ability to be an activist and a revolutionary, to make changes in their own lives or in their kids’ lives. It’s so important. So, the point of LA was going to the masses. We need to go to one of the most important cities in America as far as media is concerned — 11.5 million people, over 600,000 meals a day served in the school system. It’s the second largest school system in the country. If we can do a tiny change here for the better good, that’s big. 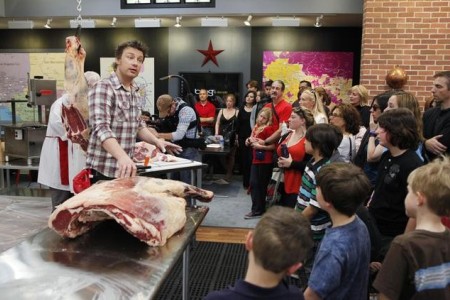 SheKnows: What do you think is the secret to the success of your Food Revolution?

Jamie Oliver: What I love about the Food Revolution, ABC, and the pleasure of broadcasting this into people’s homes is they are going to be emotionally touched. We’ve shot scenes and stories with students that really affected me and will certainly influence you. Some will even make you angry. I like that combination. It’s going to empower you. There’s lots of ideas, tips, how you can live a better life, how you can be a bit of an activist in your own schools. But also, it’s starting to unpeel where your tax money goes in a recession. I know Americans care about that.

SheKnows: What do you think is the most important aspect of your Food Revolution?
Jamie Oliver: It’s important to me that everyone knows that this is a real campaign with a TV crew, not a TV crew with a campaign — genuinely. There’s the Food Revolution Foundation, it’s a real charity. It’s pretty epic.

SheKnows: What surprised you most about your Food Revolution? 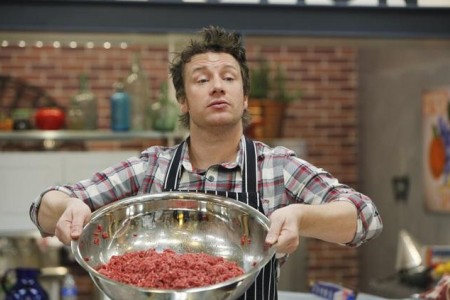 Jamie Oliver: Lots of things I thought would happen — didn’t. I didn’t have teenagers that felt bulletproof or invincible. It was incredible to see how the obesity epidemic has gotten so intense that even the young generation are worried about losing mums and dads. Or maybe, they have already. It’s really bad.

SheKnows: So, what were the limits put on you by the Los Angeles school board?

Jamie Oliver: Basically, I couldn’t work in the cafeteria. I couldn’t work in the kitchen. I was banned. I couldn’t work with the food otherwise I would be kicked out of the school. Basically, I had to become a teacher. I was forced to work in food around my subject, math — using math to talk about candy bars and calories. How many times would you have to run around the football field to lose the calories from the candy bar? Stuff like that. Kids didn’t realize that when they ate stuff, what it actually meant. I did a science class, “What’s in your food?” It’s hilarious, brilliant and people around America are going to be like, “You did what?”

SheKnows: West Adams School truly went to bat for you, didn’t they?

Jamie Oliver: It’s amazing to see how much this school fought to have me in here. Ultimately, it’s like watching bullying. And, it’s not nice. This isn’t a private company. This is the education authority of Los Angeles. Your taxes pay for it. I know America will care. You see how the school board is frightening this school every day, just for having me in there.