Did you miss out on Charlie Sheen’s live My Violent Torpedo of Truth show? Not to worry, little warlocks. Charlie Sheen will appear tonight on Drew Carey’s Improv-A-Ganza.

The reviews seem to be mixed as far as Charlie Sheen’s live comedy tour, My Violent Torpedo of Truth, however, you can see him in action when he appears on Drew Carey’s Improv-A-Ganza tonight at 8 p.m. and 10 p.m. on the Game Show Network. Do you think Sheen’s improv skills are winning — or losing? 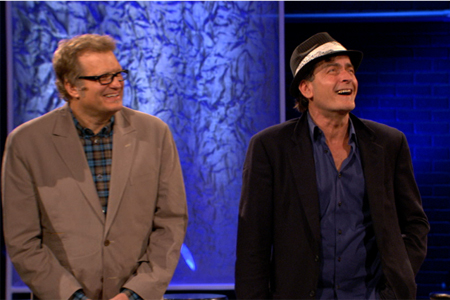 The show is similar to Whose Line Is It Anyway? in which cast members (including Wayne Brady, Ryan Stiles and Colin Mochrie) test their improv skills.

The episode starring Charlie Sheen was filmed back in November (pre-breakdown!) in front of a live audience in Las Vegas. A couple of weeks later, Sheen trashed his hotel room, got fired from his hit show Two and a Half Men, joined Twitter — and the rest is history.

Watch Sheen test his improv skills as he and the other cast members take turns adding lines to an unscripted story. We can only guess where Sheen took the story!

“I’ve only met him a few times,” Carey told reporters. “Every time I’ve met him, [he was] super nice, super friendly. When I read about him going off and having a bad temper and being mean, I just think, ‘Wow, he’s never, ever done that with me.’ I’ve never seen him drunk or on drugs or anything either. I’ve only seen him sober. I’m probably the only person in the world who’s only seen him drinking water, as sober as a judge.”

Watch this clip of Charlie Sheen on Improv-A-Ganza and tell us if you notice any pre-meltdown clues!