ABC brings us a three-hour comedy block Wednesday! Fans get two episodes of Modern Family and the back-to-back premiere of Happy Endings, as well as new episodes of The Middle and Better with You.

At 8 p.m., Mike takes a stand against Axl’s sloth in The Middle: The Legacy, but it turns out big daddy may have an ulterior motive. Axl’s been a slob for years now, but Mike suddenly can’t take his son’s dirty, smelly socks lying around the house anymore? When he pulls Axl from the final basketball game of the season, the family becomes suspicious. It seems Axl is closing in on his father’s record for most free throws in a season and the Hecks think Mike is trying to defend his title. In other news, Sue is over the moon when she wins the cross-country MVP award and Brick doesn’t want to wear the hand-me-downs from his rebellious cousin. 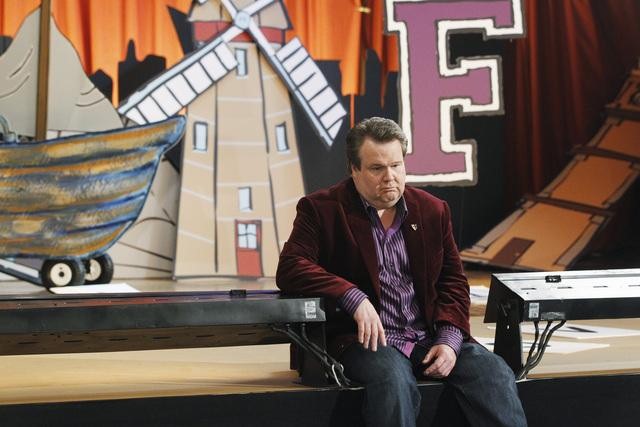 Then on Better with You: Better with a Job, Maddie lands a big promotion… followed by a layoff! While she tries to save face with wild stories, Mia and Casey deal with their early baby present from the grandparents. The parents-to-be are hoping for a fancy new camera. Instead, Vicky and Joel give them The Little Brown Puppy, one of Mia’s childhood books. Things take a turn when Casey realizes they can sell the family treasure for $300 and get that camera after all, especially since the book from the ’70s seems to have a hidden, negative message in it.

At 9 p.m., it’s an all new Modern Family called The Musical Man. Cam goes over the top when he steps in as the interim music director at Luke and Manny’s school. Mitch worries he’s setting the bar too high for the kids, but has to backtrack when he sees he’s hurt Cam’s feelings. Meanwhile, Phil uses the family in his new realty ad, but gets unexpected results when he pastes the image on their minivan. In the midst of all this, Haley sends her parents over the moon by pulling off an average score on the SATs, but brings them crashing back to earth when she tells them she’s not going to college. Jay deals with his own family drama when his brother comes to town (Jonathan Banks).

Then it’s time for the back-to-back premiere of Happy Endings. The new sitcom takes off after one member of a tight clique, Alex (Elisha Cuthbert), leaves another, Dave (Zachary Knighton), at the altar. The pilot watches the crew try to weather this storm, including Alex’s suburban sis Jane (Eliza Coupe) and her buttoned-up hubby Brad (Damon Wayans Jr), gay pal Max (Adam Pally) and desperately single Penny (Casey Wilson), but Happy Endings is about more than just Dave and Alex’s botched wedding. With a slew of standup and improv actors in the cast, it promises to be a wild ride.

In the second episode, Happy Endings: The Quicksand Girlfriend, Dave lands in “chicksand” when his one-night-stand (Courtney Henggeler) sucks him into a relationship. Meanwhile, Jane tries to manage Alex’s search for a new roommate now that Dave has moved out.

Finally, at 10:30, it’s a rebroadcast of an episode of Modern Family: Travels with Scout. Fred Willard stars as Phil’s father, who comes to town in an RV with a new dog, while Cam gets a chance to rock out with Dylan’s band.

The three-hour comedy block starts at 8 p.m. on ABC on Wednesday, April 13.