In the midst of the Steve Nash baby daddy drama, his ex-wife Alejandra Nash said in an interview given weeks after the baby was born that baby Matteo was planned. 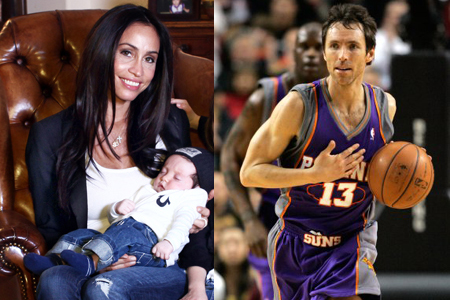 Phoenix Suns star Steve Nash announced plans to divorce his wife of five years just one day after the birth of their third child, surprising many fans. Rumors shortly followed saying that Nash had suspected his wife of five years to be cheating on him — and those rumors were confirmed once the baby was born.

Steve Nash joined Lakers to be a good dad >>

She had allegedly been cheating with Suns teammate Jason Richardson — who was quickly traded to Orlando in December.

Nash has only made one statement on the matter, which he released to Life & Style magazine shortly after announcing his divorce:

“This is a bittersweet moment for my wife and I; after five years, we are now in the process of dissolving our marriage. This will be my only statement on this.”

Alejandra has kept quiet since the Jason Richardson rumors started, but we found an interview she gave to Arizona Foothills magazine shortly after the birth of their child in which she talks about baby Matteo and poses for pictures with her newborn baby and twin girls (see photo above).

When asked about the challenge of having a newborn in the house, along with their twin girls, Alejandra said: “The toughest part is after six years getting back to diapers! You forget how much work it is to have a newborn! But having two girls we really wanted a son. We planned Matteo for an entire year, and we are both so excited to have him in our lives. The best part is to see the girls love their baby brother and try to be good big sisters.”

Alejandra, who was born in Paraguay, doesn’t talk much about Nash, only saying, “I wish him the best,” while confessing that their relationship “has its ups and downs like every other marriage.”

What does the future hold for the former Mrs. Steve Nash? She says she is keeping it positive. “Future looks good. But I am learning that the journey is the important thing to focus on. Being present every moment, so I try not to think too much about the future.”