TLC’s hit show Quints by Surprise returns April 18 and marks the quintuplets’ second birthday with a special that follows Ethan and Casey Jones as they map out a birthday party worthy of the quints’ big day!

The Quints by Surprise special airs on TLC at 9 p.m. and showcases an affair to remember for the five little ones including a sledding hill, clowns galore, a bounce house (what kids’ birthday party is complete without one!), a cavalcade of sweets and more. 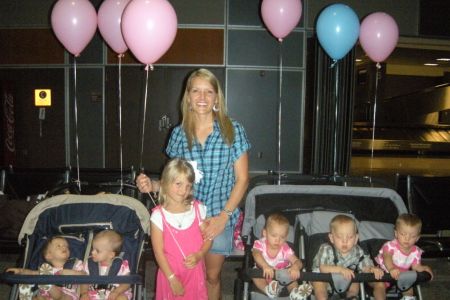 The Quints by Surprise: Turning 2 special is simply the beginning for Quints fans! The show returns for its second season premiering May 9 at 10 p.m. as the Joneses find their way through life with the challenges of raising six children.

SheKnows is proud to present an exclusive clip from the special, taking our readers inside the show as we give you a preview available nowhere else.

Ethan and Casey Jones are marking the quints’ second birthday by also being a bit more altruistic than most children’s birthday parties tend to be. The couple is asking their guests to not bring gifts, but instead bring coats. The Joneses will then donate the coats to the charity Coats for Kids.

On the birthday special, audiences get to see the peaks and valleys of planning a birthday party for not one, but five children sharing the same birthday! The Joneses have four days to get everything set up.

Our exclusive clip shows how life is quite complicated for parents of quintuplets, much less parents who also have a slightly older little girl. The key, as the hit show illustrated in its first season, is organization. Can you imagine having quintuplets and what that would mean to the dynamics of family? Watch Quints by Surprise and marvel at how the Joneses do it. There’s keeping up with the Joneses and then there is Quints by Surprise!