After dazzling us with her dramatic onscreen acting prowess for years now, it is refreshing to see Anne Hathaway get a little animated in Fox’s new family film, Rio.

Anne Hathaway is Jewel, one of two remaining blue macaws in the world. Hathaway’s Jewel lives in Rio and is set to be matched with the Jesse Eisenberg-voiced sole remaining male macaw to save their species. 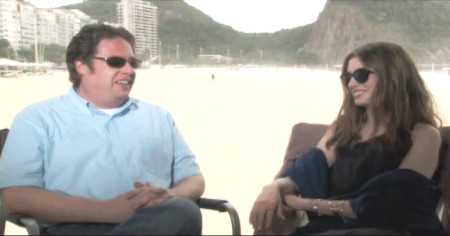 Like Blu (Eisenberg), we too flew to Rio to meet Hathaway and had a nice chat on one of the world’s most famous beaches — Copacabana.

Anne talks Oscars, the movie Rio, being in Rio and how this actress has gone from onscreen princess to princess of Hollywood in the span of her career. Hathaway relished the opportunity to voice Jewel in Rio, but the requirement that she sing in the film, specifically for Sergio Mendes and Will.i.am as they mixed the soundtrack, was even scarier than taking the Oscar stage as host in front of a billion people.

SheKnows is in Rio basking in the delights of the charming South American city. We are visiting with the biggest stars in Hollywood, who have made the trek to Rio for the movie’s world premiere and to chat with the hottest publications in Hollywood, and of course SheKnows is front and center!

In the coming days, look for my exclusive video interviews with Will.i.am, Sergio Mendes, Taio Cruz and the larger-than-life superstar that is Jamie Foxx.