Shirley MacLaine revealed her polyamorous past on Monday’s Oprah. Which famous men were among her conquests?

Hollywood icon Shirley MacLaine was the guest du jour on Monday’s Oprah and the actress revealed some pretty saucy tidbits about her past. Among the revelations? She slept with three men during the same day and had an open marriage with her husband! 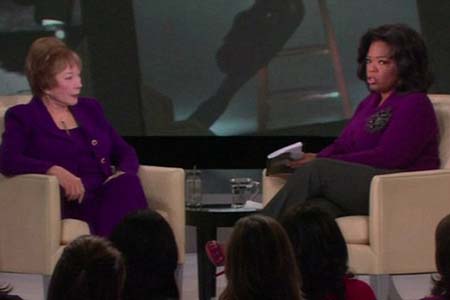 “I had many love affairs — and a lot of awful lovers. I wasn’t into ‘sexscapades’ but I did try it once. I had three people in one day,” MacLaine told Oprah. “It was a political campaign where everyone was doing the same thing. So I didn’t want to be left out.”

The actress said that sort of lifestyle wasn’t for her — she had to be emotionally involved with the men she slept with.

“I had an open relationship with my husband [Steve Parker]. I had other affairs and so did he. But we were very good friends,” she revealed.

Now, on to the juicy deets — which notable dudes did MacLaine welcome into her bed?

“I wasn’t attracted to Jack Lemmon. He was a sweetheart. He didn’t have that dangerous, complicated sexual thing that I liked helping the man I was attracted to figure out,” she said.

“I had quite a relationship with Robert Mitchum. And [French singer] Yves Montand…I was attracted to some of the directors,” she revealed. MacLaine also had relationships with singer and actor Danny Kaye and Andrew Peacock, the former foreign minister to Australia.

So why didn’t the details get out before now?

“Everyone knows that what happened on a set stays on a set. No one talked.”