Britney Spears confirms that hip hop superstar Nicki Minaj will be joining her on the Femme Fatale tour this summer. Will you see it? 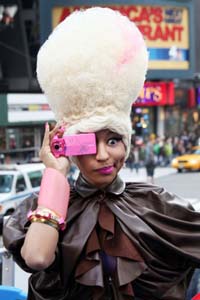 It’s official! Nicki Minaj will join Britney Spears on her Femme Fatale tour this summer. Minaj was rumored to be the choice after Latin crooner Enrique Iglesias quickly pulled out of the tour, but nothing was confirmed until now.

“This is the Femme Fatale tour and I’m thrilled to have the hot Nicki Minaj join me and Jessie and the Toy Boys and Nervo will get everyone on the dance floor,” Spears wrote on her website. “Can’t wait to take the Femme Fatales on the road.”

This wasn’t entirely unexpected — Minaj hinted that she was joining the tour last week.

“I am in talks of joining Britney Spears, yeah,” Minaj told MTV News. “I’m in talks about a lot of things, ya know. I don’t know — oops, I did it again.”

The tour kicks off June 16 in Sacramento and tickets go on sale April 30 on Ticketmaster and Live Nation.

We’re super pumped to see both of these superstar women on tour, but we have one thought: Will Nicki Minaj outshine Brit Brit? Yes, Britney is back in a big way with Femme Fatale — it debuted at number one on the Billboard Hot 100 — but Minaj has fans all over the musical map. Minaj has the power to attract everyone from hardcore hip hop fans to pop lovers and everyone in between.

Also, Minaj has a bigger-than-life personality and accessible appeal to her. Britney is almost untouchable these days — promotional interviews ahead of the Femme Fatale release had to be pre-taped for editing so there was no room for random outbursts or off-the-cuff comments. Yeah, yeah — we know it has a lot to do with Britney’s past, but we miss her randomness (without the crazy, of course).

What do you think: Will Nicki Minaj outshine Britney Spears on the Femme Fatale tour, or will Britney always stay on top?