Nicole Richie is taking the media to task for suggesting she might be pregnant with her third child. 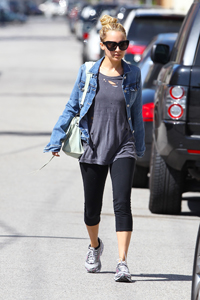 Nicole Richie is not pregnant, thank you very much, and she says you kind of suck for even suggesting she might be. The reality-star-turned-designer says such rumor-mongering does nothing but make women feel crappy about their bodies for no reason.

In a statement, Nicole said, “Contrary to recent speculation, I am not pregnant. This irresponsible reporting continues to feed an atmosphere of self-doubt and insecurity. To publicly point out a change in anyone’s body is mean-spirited and cruel. People’s bodies change and change again. This is not newsworthy and is a waste of valuable media space that should be used for more important issues.”

The latest round of is-she-or-isn’t-she started when Nicole was spotted wearing a loose-fitting t-shirt in LA last week. Problem is, she was actually leaving the gym and the tiny fashionista often sports loose, floaty outfits.

read on for more nicole richie