Dennis Quaid talks about his past addictions — including rampant cocaine use — in a new interview. You won’t believe what he says happened on set during the ’80s. 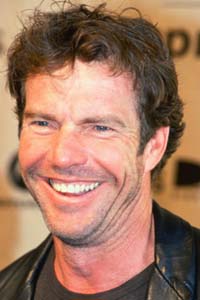 Dennis Quaid confirmed something that we always suspected happened on movie sets — money for cocaine was budgeted into films during the 1980s. The Soul Surfer actor opened up about his past in the new issue of Newsweek and revealed some pretty intimate details about his past addictions.

“Cocaine was even in the budgets of movies, thinly disguised,” he said. “It was petty cash, you know. It was supplied, basically, on movie sets because everyone was doing it. People would make deals. Instead of having a cocktail, you’d have a line.”

“So it was insidious, the way it snuck up on everybody. Coming from where I came from — lower-middle-class life, from Houston into Hollywood — and all of a sudden this success starts happening to you, I just didn’t know how to handle that. Doing blow just contributed to me not being able to handle the fame, which, at the time, I guess I felt I didn’t deserve,” Quaid continued.

His lowest point came in the late 1980s while filming The Big Easy.

“I was a mess… I’d wake up, snort a line, and swear I wasn’t going to do it again that day. But then 4 o’clock rolled around, and I’d be right back down the same road like a little squirrel on one of those treadmills,” he admitted.

Quaid went on to explain that a near-death experience convinced him to get clean, but that sober life was a lot harder than the high life.

“That time in my life — those years in the ’90s recovering — actually chiseled me into a person. It gave me the resolve and a resilience to persevere in life. In the end, it taught me humility.”

Now, he’s hoping his troubled brother, Randy Quaid, can do the same.