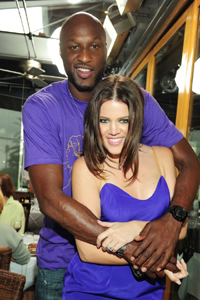 The series debut of Khloe & Lamar proved that viewers have not gotten sick of the Kardashian clan. The new series, which follows the lives of newlyweds Khloe Kardashian and Lamar Odom, drew big numbers — although not quite as big as the three million viewers that tuned in for Kourtney and Kim Take New York.

Family drama reigned supreme in the first show from the reality couple, as Lamar’s estranged father, Joe, tried to mend their father-son bond. He shows up at a book signing, surprising Khloe and Lamar. When Khloe tries to encourage a relationship between the father and son, Lamar opens up and tells her that his father is a heroin addict. It doesn’t take long before Joe has called the couple asking for money.

Rob Kardashian, Khloe’s younger brother, also makes an appearance on the show when he stirs up some drama as he moves in with the couple.

Other personalities on the show include Khloe’s personal assistant, Malika, and Lamar’s good friend, Jamie.

Khloe & Lamar is the fourth reality show for the busy Kardashian family, who earned $65 million in revenue last year. It all started with Keeping Up with the Kardashians, followed by Kourtney and Khloe Take Miami and Kourtney and Kim Take New York. There are rumors that the youngest sisters — Kendall and Kylie Jenner — are also in talks for a reality show!

Tell us: Did you watch Khloe & Lamar? Will you continue to watch it?

read on for more kardashians