Pia Toscano was eliminated from American Idol on Thursday — and a week later she has a record deal and a new romance with Dancing With the Stars pro dancer Mark Ballas. Maybe being booted off of Idol wasn’t such a bad thing?

When Mark Ballas isn’t rehearsing with his Dancing With the Stars celebrity Chelsea Kane, he apparently is spending time with ousted American Idol contestant Pia Toscano.

The 22-year-old Toscano was spotted having a first date with Ballas at the Gulfstream restaurant in Century City, reports TMZ. 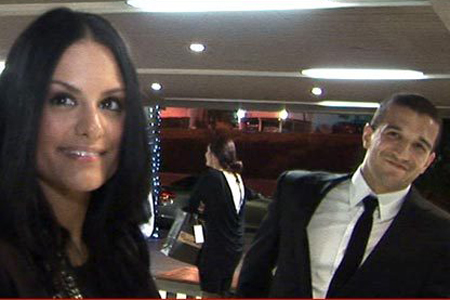 How did the two busy performers find the chance to meet — in the midst of their rehearsing craziness?

A source reveals that Toscano “had a crush” on the dancing pro and was “giddy” to discover that not only were the DWTS and American Idol soundstages next to each other but their trailers were as well!

The love connection got some help when Dancing contestant Chris Jericho helped “facilitate the hook-up” — whatever that means! Could he have slipped Toscano’s number under Ballas’ door?

Regardless, the couple had a “great first date” and reportedly, they plan on going out again.

Tell us: Do you think Mark Ballas and Pia Toscano make a cute couple?

Read on for more on Pia Toscano