Kelly Clarkson is heading back “home” this week — she’s set to sing on American Idol on Thursday night! What is she planning to sing? 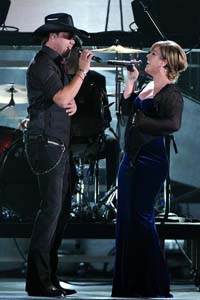 Kelly Clarkson is coming back to sing where it all started — American Idol. Clarkson, 28, will sing her current duet with country singer Jason Aldean, Don’t You Wanna Stay, on Thursday night’s results show.

The appearance on AI marks another return of Clarkson to the stage — she sang a medley of her hits on The Ellen DeGeneres Show last week. The performances are intended to set the stage for Clarkson’s new record, due in September. The album, which Clarkson just finished, is “influenced by Prince, Tina Turner, Sheryl Crow, Radiohead and there’s a little bit of a country vibe-influence on a couple of songs,” she said.

We’re so excited to see Clarkson back on the Idol stage. So much has changed — both for Idol and Clarkson — since she won the first season. Clarkson even tried to distance herself from the show by refusing to license her music for the show back in 2006.

“It’s the public who bothered to pick up the phone to vote for her,” said former AI judge Simon Cowell. “If she refuses to give songs to be used on the show, it’s like saying to every person who voted for you, ‘You know what? Thank you. I’m not interested in you anymore.'”

She eventually caved and now grants contestants the use of her songs on a case-by-case basis. Now, it looks like all is well and good between Clarkson and Idol — and we can’t wait to see her on stage again.

Will you be watching for Kelly Clarkson on Thursday night?