Drew Carey is back and he has brought along his improv all-stars for a new series airing on the Game Show Network entitled Drew Carey’s Improv-A-Ganza! We’ve got an exclusive clip from the show that premieres tonight at 8 p.m. and 11 p.m. 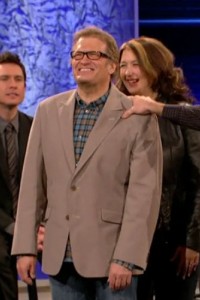 In many ways, Drew Carey’s Improv-A-Ganza picks up where the Drew Carey-hosted hit show Whose Line Is It Anyway? left off. The premise of the show is quite simple: The improv all-stars tackle numerous improv games over the course of the program.

SheKnows attended the show and could not have been more impressed. We were lucky enough to catch the evening where Wayne Brady made a special appearance. Drew Carey and his all-stars are in prime form and the cast provided some great insight into the process of being good improv comic actors when we visited with them recently. The show was taped at the MGM Las Vegas earlier this year.

Check out our exclusive clip from the show, as well as some preview clips to whet your appetite as Carey’s big show premieres on the Game Show Network!