Jenn Sterger sat down with Good Morning America to try and clear her name regarding the Brett Favre scandal. Did she succeed?

Jenn Sterger, the woman at the center of the Brett Favre sexting controversy, is finally speaking out about the allegations and media hoopla. Sterger will be on Good Morning America Tuesday and Wednesday to address rumors and says she never received a dime for her statements. 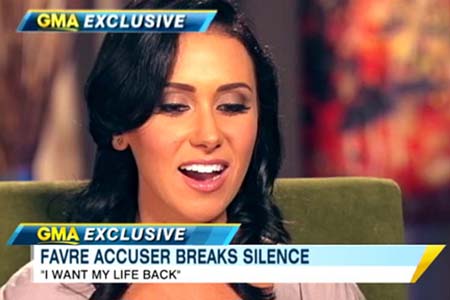 “I’m not a gold-digger,” Sterger, 27, said. “I haven’t made a dime off anything in this whole situation. Not from the pictures. Not from Favre. I never wanted to sue anyone. That was never an intention of mine.”

Sterger went on to say that she never gave Favre her phone number. Instead, a Jets rep asked her what she would do if Favre asked for it.

“I just looked at him, my usual smart-ass self. And I said, ‘I’d say I like my job an awful lot. And I’ve been told I look remarkably like his wife,'” Sterger said. She thought that was the end of it.

It wasn’t. Favre apparently did get ahold of her number — and sent her lewd text messages that included pictures of his — ahem — little Favre. The NFL eventually investigated the allegations and fined Favre $50,000, though they never proved that he sent the messages.

Do you think Sterger was in it for cash and fame, or is she telling the truth?