Ashley Judd has slammed the rap and hip hop community for its lyrics and videos that demean women and promote misogyny. 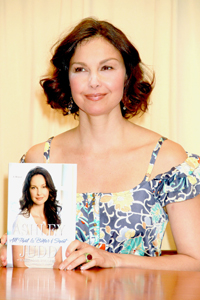 In her new book All That Is Bitter and Sweet, Ashley Judd says rap and hip hop are partially to blame for creating an environment in which women and young girls are sexualized and objectified, allowing for abuse to be seen as no big thing.

“As far as I’m concerned, most rap and hip hop music — with its rape culture and insanely abusive lyrics and depictions of girls and women as ‘ho’s’ — is the contemporary soundtrack of misogyny,” Judd wrote.

“I believe that the social construction of gender — the cultural beliefs and practices that divide the sexes and institutionalize and normalize the unequal treatment of girls and women, privilege the interests of boys and men, and, most nefariously, incessantly sexualize girls and women — is the root cause of poverty and suffering around the world.”

As you can imagine, this ignited a firestorm in the hip hop community, none of whom had actually read Judd’s book. But the actress is not backing down and even sat down with hip hop mogul Russell Simmons to expound on her opinion in an interview with Global Grind.

“My intention was to support artists to know that they have so much power,” Judd told Simmons. “They make incredible life changing impressions, particularly on the young. And we have choices every day with our expressions, either empower and celebrate people or to re-enforce inequality and degradation.”

“There are elements, and that is the part that has been so distorted. What I’m being accused of is condemning rap and hip hop as a whole, and the whole community and when they say community, they mean the fans and African-Americans. It’s become so generalized.”

“My intention was to take a stand to say the elements of that musical expression that are misogynistic and treat girls and women in a hyper-sexualized way that are inappropriate. That is not acceptable in any artistic expression, in any cultural form, whether it’s country music or in television story lines. And if they read more than one paragraph in the book, they would see that all 400 pages are about that.”