The Sister Wives cast is getting a whole lot bigger. Kody Brown recently announced he and fourth wife Robyn are expecting their first child.

Sister Wives star Kody Brown is going to have another mouth to feed. According to People magazine, the TLC star and his fourth wife, Robyn, are expecting their first child together. 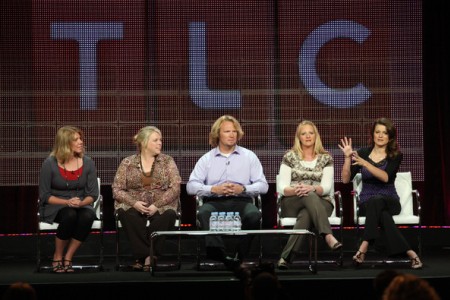 The newest Brown is reportedly due in October. “I’m overjoyed,” Kody Brown told People magazine. He added, “This connects Robyn and I together in a way that nobody can take away.”

The preparation for Kody and Robyn Brown’s 2010 union was captured by TLC cameras as part of the Sister Wives series. To protect the religious aspects of their ceremony, the Browns only allowed parts of their reception to air on the series.

Baby Brown will make number 17 for Kody Brown who shares 16 other children with the other three wives. Robyn has three from her previous marriage.

The Sister Wives series has been detailing the issues the family has been facing since coming out to the world as polygamists. Kody Brown recently moved his family to Las Vegas in hopes of a better life. “We didn’t want this thing hanging over us,” Kody recently told ABC News. “We went to Vegas with hopes of having a good life, preserving the family. We never did anything here at all to be rebellious, to challenge the statutes of the law, or anything like that.”

Congratulations go out to Kody and Robyn Brown!