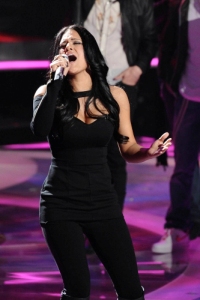 All of the intense love after Pia Toscano’s controversial American Idol elimination was no doubt overwhelming for the singer. But when Jimmy Iovine, Idol mentor and Interscope Records chair, comes knocking at your door with a record deal in hand, you know your life’s about to hit the fast track.

Before the dust even had a chance to settle on Pia Toscano’s last moments on American Idol, the talented songstress was being courted by Interscope Records and Jimmy Iovine. Okay, courted is not really the right word. Toscano was basically signed in a rush deal to get her in the studio and cranking out an album as quickly as possible.

If that doesn’t change the life of a 22-year-old singer from New York, we don’t know what would.

“Pia is being signed to a deal with Interscope Records who are rushing her into the studio to record an album ASAP,” a source revealed to UsMagazine.com.

The source added, “Starting [Thursday] night after the show, Interscope told her they wanted her and first thing [Friday] morning Interscope brass started calling every top songwriter and producer in town to get an album together and rush release it.”

Details of Pia Toscano’s new record deal aren’t being released, but the source said, “Papers are being finalized. It’s basically a done deal. She’s signing. They rushed everything but she’s so excited.”

Toscano herself isn’t taking her shocking elimination too hard. She visibly looked shaken on the American Idol results show, but after time to process it, she’s okay.

“You don’t know for sure why things happen, but you know, it did!” she revealed to reporters during a conference call. “It was my time to go on the show and I’m excited to see what my future holds.”

What do you think of a Pia Toscano record deal with Interscope Records and Jimmy Iovine? Would you buy her album?