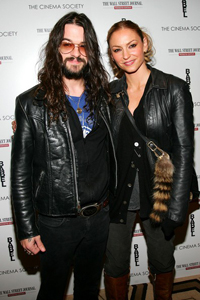 “Waylon Albert ‘Blackjack’ Jennings has arrived,” Jennings tweeted. “Thanks for all the kind words folks! We’re super lucky to have so many kind friends!”

We are not sure if they will call the baby Waylon (after grandfather and country singer Waylon Jennings) or Blackjack, but the engaged couple is fond of unique names. They have a three-year-old daughter named Alabama Gypsyrose.

Jennings hinted to Us magazine earlier this year that the couple wanted a large family. “Drea’s the best mother in the world. I love her so much. She is such an important part of our lives. The more children we can have the better, we want a bunch of kids!”

They are not the first celebrity couple to have a fondness for unique baby names. Ashlee Simpson and Pete Wentz named their son Bronx Mowgli and Sylvester Stallone named his two children Sage Moonblood and Seargeoh.