Fans and judges were surprised when American Idol favorite Pia Toscano was eliminated off of last night’s show — and today, there are rumors that a voting glitch may have been responsible for her premature exit. 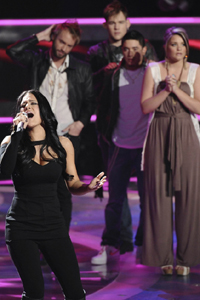 Fans are speaking out over the elimination of American Idol’s Pia Toscano, saying there was a voting glitch online that would not allow them to vote for the 22-year-old New Yorker.

Despite the complaints from fans, a production source said there were no issues with voting.

But still, the question remains: Is American Idol’s voting system flawed? Or did America like Pia — but not love her enough to vote for her? It seems many fans are now speaking out, but were they actually voting for her when it counted?

Pia herself admitted that she wasn’t shocked she was voted off — and even had a premonition it would happen.

“I wasn’t shocked, but I was upset to leave the contestants and to not be performing on the show again. But I want to stay positive and know that everything happens for a reason,” she said. “I can’t say why I was voted off, I just know it was my time to go. I have no regrets and I had a great time.”

Tell us: Did you have any issues voting on American Idol?