Soul Surfer should be an inspiring film. Teenage surfer Bethany Hamilton’s life story is one that is equally as uplifting for children and adults alike. Unfortunately, the film version of her life fails to ignite any kind of inspirational spark. 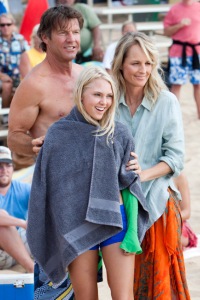 In 2004, Bethany Hamilton was out surfing in her home state of Hawaii when a 14-foot tiger shark swam up and bit her arm off. Signs of her inner strength are immediately on display as her stoicism after the attack is what lent calm to those who would save her.

Prior to the accident, Hamilton was a pro surfer in the making. She was at or near the top of all of her competitions and was well on her way to being the best. Tragedy only solidified her passion to surf and the inspiration that is Hamilton proved powerful for millions of people worldwide as her story made the evening news. Three weeks after losing her arm, Hamilton was back in the water. Initially she gave up because the difficulty of surfing with one arm proved too much. But, after receiving piles of mail from people extolling how her story had changed lives, Hamilton headed back out into the water.

AnnaSophia Robb is a perfect choice to portray Bethany Hamilton. And the supporting cast is also well chosen, including Dennis Quaid as Bethany’s dad and Helen Hunt as her mother. Carrie Underwood makes her big screen debut and is slightly stiff, but shows signs of promise. We look forward to seeing Underwood in future roles and can see her acting skills improving with time.

Where Soul Surfer falls off the board is how the film is put together. Directed by Sean McNamara from a screenplay he wrote, Soul Surfer feels more like a made-for-TV movie than a biographical film meant to move the masses. There is some controversy attached to the film about its heavy-handed use of religion. That is not where the film fails. The Hamilton family is deeply passionate about their religion and the film does the family justice by portraying that fact. The issue with Soul Surfer is a small one — the cinematic delivery of the story.

Is it too early to ask for a remake?