Your Highness began as one of those crazy ideas between friends. So many pop into the heads of Danny McBride and his co-writer Ben Best, they never know what will strike the fancy of studio executives. To say they were surprised that Your Highness was green-lit is an understatement.

Give the studios a little credit for appreciating the type of humor that Danny McBride has come to specialize in whether it’s on Eastbound and Down or in Pineapple Express. Your Highness is a pot comedy, sure, but that is barely the surface of the comic juice in the film starring McBride, James Franco and Natalie Portman. 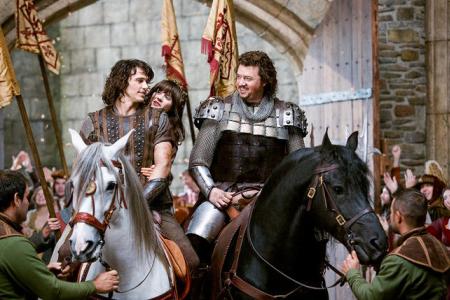 In Your Highness, McBride is Prince Thadeous, an insecure brother to the dashing war hero Fabious (Franco). As the film begins, Thadeous is enjoying his life as a playboy player when his brother returns not only triumphant from war, but with a fiance (Zooey Deschanel) in tow. Suddenly the kingdom is aflutter over a royal wedding (timely, no?), especially Thadeous’ hard-to-please father, the king.

It is right before the wedding that the evil wizard Leezar (Justin Theroux) arrives and steals away the bride-to-be. Fabious rallies his loyal soldiers and also insists that his brother come along for his first quest as they seek to destroy Leezar and rescue the princess.

Once on the quest, the barrage of McBride humor is on full display. His fish-out-of-water performance is an utter delight. And Franco, well, James seems to be reveling in his role as the typical medieval movie prince by turning the classic role on its head. For example, in a scene where the brothers visit an interestingly odd wise man, the sexual innuendos are fast and furious while riding the line between hilarity and crudeness. 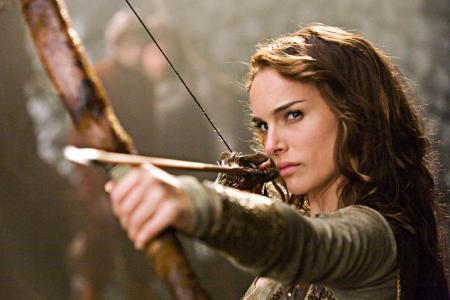 Then, there’s Natalie Portman. As the movie trailers show, she kicks serious butt. She catches Thadeous’ eye, only to throw him on the ground with disgust. Part of the charm of Your Highness is the onscreen comic chemistry between McBride and Portman. Natalie has seamlessly put herself in McBride’s comedy boys’ club. It’s terrific to see her flexing her comedy muscles after the seriousness of Black Swan. Portman’s Oscar be damned, she is perfect amongst the utterly silly in Your Highness, embracing her inner child who appreciates bathroom humor sprinkled with influences from 1980s medieval-set movies such as Krull and Beastmaster.

Your Highness reunites James Franco with Danny McBride, after their first successful pairing in Pineapple Express, and the duo has another blast on screen firing the funny at full speed. It’s a joy to watch Franco have fun after a string of serious roles.

If you haven’t had the opportunity to witness McBride and his comic performances in Pineapple Express or Eastbound and Down, he is a treasure. His talent has a knack for being as subtle as it is sublime and we look forward to the next great idea that pops into McBride and Best’s collective consciousness.