Isobel went up in flames, Bonnie received the power of 100 witches and Klaus invaded Alaric’s body — that’s only the beginning of the final six new episodes of The Vampire Diaries.

If the upcoming episodes leading to the season two finale of The Vampire Diaries are anything like Know Thy Enemy you might need to grab the nearest oxygen mask — you will be left breathless. 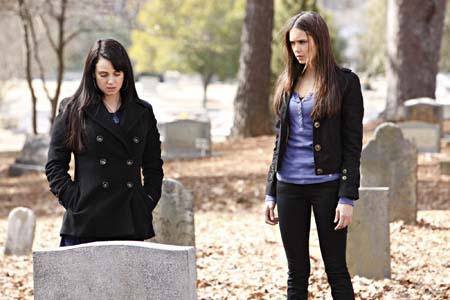 We knew coming back from hiatus that Know Thy Enemy was going to be epic but we didn’t think Isobel would burn in the sun and Alaric (Matt Davis) would be possessed by Klaus!

The Vampire Diaries: Damon, Stefan & Elena are had

While Damon (Ian Somerhalder), Bonnie (Katerina Graham) and Jeremy (Steven R. McQueen) traveled to the site where 100 witches perished, Elena (Nina Dobrev) was left behind with Stefan (Paul Wesley) to accept a check from Mrs. Lockwood in her mother’s name.

Everything seemed innocent enough, that was until Katherine (also Nina Dobrev) and Isobel reunited in an alliance. Katherine found the moonstone at the Salvatore house (it was hidden in the decorative soaps) and the two craziest vamp ladies in Mystic Falls made Alaric their first victim.

Isobel showed up at his car professing that she was sorry for what was about to happen then unleashed her warlock on him. He was gone for the rest of the episode — so we thought.

While at the Lockwood gala, a diversion was created in the form of Isobel biting John. Uncle John landed with a nice thud to the floor as everyone flocked to help him. Operation switch Elena and Katherine commenced.

Meanwhile, Bonnie was successful in channeling the power of 100 witches, but it came with a warning — be careful of how much power you use, it could kill you.

Matt pressured the sheriff about the news that a vampire killed his sister. She was not about to have the town’s secret blabbed. She brought him to her and Caroline’s (Candice Accola) house to cool off.

Back at the Lockwood mansion, Stefan realized Katherine switched places with Elena. Kat silenced Stefan and made her way towards connecting with Isobel who had Elena. The plan? Katherine had the moonstone and Isobel had Elena — it looked like they were getting ready to hand her over to Klaus.

The Vampire Diaries: Isobel goes up in flames!

Just as we thought Elena was headed to meet Klaus, The Vampire Diaries fooled us again. The warlock that took Alaric snatched Katherine. Turns out it was a total cross on Isobel’s part. Klaus wanted Katherine and the moonstone the whole time. Isobel took Elena to keep her safe. 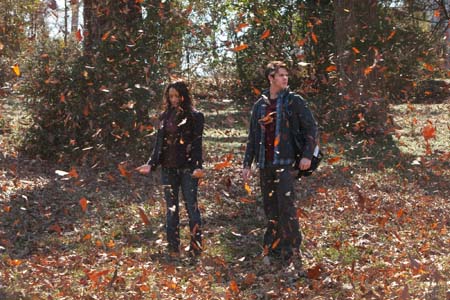 Isobel took a detour to show Elena her human grave site. While there, Isobel got a call saying her duty was done. Turns out she was compelled by Klaus. He didn’t want Elena just yet. Disgusted by herself, Isobel tore off her protective necklace and literally burned to the ground in front of Elena!

With Elena safe at the boarding house, John finally came back to life and tried to apologize for all the set-ups. The dysfunctional father and daughter made the best out of the situation and called a truce — for now. Oh, did we mention Damon and Stefan put the deed to their house in Elena’s name so it could be her safe house? No vamps getting in there!

Matt begged Caroline to compel him to forget everything. She did as he asked and as he left the house he got into the sheriff’s car. He had drunk vervain and spilled what he knew to the sheriff.

As if watching Isobel burn wasn’t dramatic enough, Katherine woke up in a room with the warlock who took her. She wasn’t the only captive. Alaric was tied to a chair while the mystery warlock chanted some witchy voodoo.

So now we have Bonnie with the power of 100 witches, Isobel gone and Alaric possessed by Klaus. One of these things works in the favor of Damon and Stefan. No one else knows Bonnie got her powers back or that they found the site of the dead witches — commence operation secret weapon Bonnie!

What did you think of last night’s episode of The Vampire Diaries?