SheKnows went to Rio for the world premiere of Fox’s charming animated film Rio. We are thrilled to give our readers a taste of what’s coming, from our exclusive video interviews with the cast including Jamie Foxx, Will.i.am, Jesse Eisenberg and Anne Hathaway, to a treat of a video that is yours truly jumping off of one of Rio’s highest peaks with nothing but a parachute. We put you above the city to give you a feel of the sights and sounds of one of the world’s most excellent cities.

Rio is the story of Blu (Jesse Eisenberg), one of the last blue macaws in the world, who is taken as a baby from the rain forest of Rio by poachers who bring him to America for sale. Blu falls off the back of the package truck in Moose Lake, Minnesota and is rescued by Linda and raised as the two become best friends. 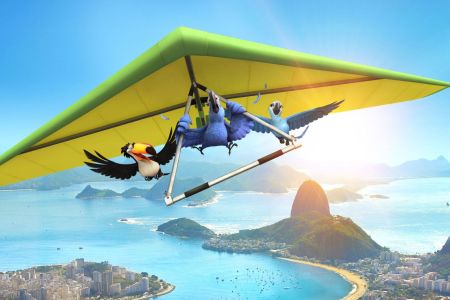 Years later, Blu is all grown and a wonderful companion to Linda, although there is one problem: He can’t fly. As he was taken before he could learn, the domesticated macaw tries, but simply cannot soar.

An ornithologist from Rio shows up at Linda’s door to say that Blu and a female macaw named Jewel (Anne Hathaway) are the only two left of their species and it is imperative for Blu to come to Rio in order to save his kind. Thus, Blu’s adventure in Rio begins. Along the way, Blu makes some new flying friends voiced by Rio’s stellar cast: George Lopez, Will.i.am and Jamie Foxx.

We’ve seen the film and it is a hilarious, heartwarming musical menagerie of all things Rio. The soundtrack is supervised by Brazilian legend Sergio Mendes with songs by Jamie Foxx, Will.i.am and Taio Cruz.

One of the themes of Rio is learning to accept one’s destiny. Blu’s destiny lies in Rio and in order to achieve that successful fate, he must learn to fly and also fall in love to save his species.

As someone who also doesn’t know how to fly, you can imagine the thrill as SheKnows took to the skies of Rio to feel what Blu would feel, should he learn how to fly!

So, sit back and enjoy a small taste of what it is like to soar above Rio and stay with SheKnows for our exclusive video interviews with the entire cast live from one of the most famous beaches in the world — Copacabana!

And don’t miss Rio when it lands in theaters April 15!