Morgan Freeman is busy at the moment going over his lines. Freeman is sitting in a director’s chair looking over a script for his latest movie, Dolphin Tale, as we walk through the Florida set. Although he is the consummate professional diving into his work, the terrific human being shows his colors by looking up and saying, “Welcome to the set!”

In Dolphin Tale, Morgan Freeman stars opposite Harry Connick Jr., Ashley Judd and the real life inspiration for the film about a dolphin whose tail was cut off. Winter, the dolphin, was found by a little boy and taken to Freeman’s character who would build the creature a prosthetic tail. It was a difficult task finding the right one and making sure it worked for Winter. The heartwarming journey to give a dolphin back his tail is captured in Dolphin Tale. 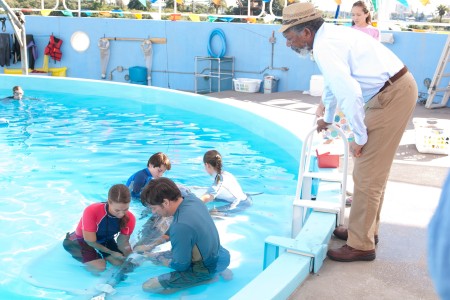 When SheKnows visited the Florida set in November 2010, we interviewed Freeman, Connick Jr. and child actors Nathan Gamble and Austin Highsmith. As the film’s release date gets closer, we will bring you all of our inside access to the 3D family film, but until then, we’ve got a first look sneak peek!

SheKnows swims with the dolphins!

Besides Freeman’s warm hello, what immediately struck us about the Dolphin Tale set is the set-wide commitment to taking this local legend and making the story accurate and emotionally as powerful as possible to audiences in the film format. From director Charles Martin Smith to the real life aquarium workers where Winter now resides, there is an aura of awestruck wonder at the tribute to ingenuity and passion for all creatures big and small that permeates this set. 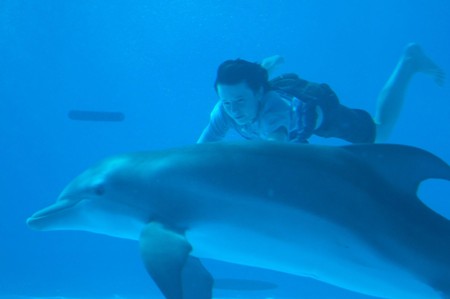 We’re also proud to present the first series of stills from Dolphin Tale throughout our preview. One of the reasons director Smith said he wanted this film to be in 3D was because of the opportunity to put the audience literally in the water with the dolphin as he successfully navigates the challenge of having a prosthetic tail. There’s even an underwater scene where Gamble’s Sawyer swims with Winter in an almost dance-like manner (photo above).

The scene we witnessed being filmed was when Freeman’s character brings what he hopes is the perfect tail to Winter (top photo). It was a perfect moment for SheKnows to see as the scene is in many ways a turning point in the story. Will the prosthetic work? How will the dolphin take to it? We would love to tell you how it works out, but you will have to wait for the film when it arrives in theaters September 23. 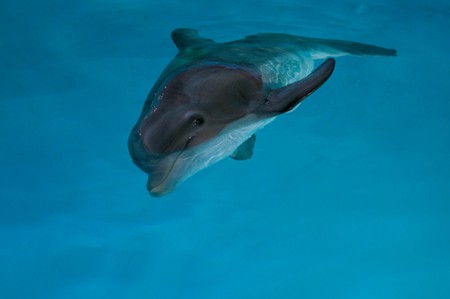 You can also look forward to all of our interviews with Freeman and the rest of his committed cast as the movie’s release date approaches!