Prince William’s mother, Princess Diana, was loved by all and would be a tough act to follow, however, Kate Middleton has done a great job so far. It still remains to be seen how she handles her royal duties once she and Prince William get married on April 29, but she is off to a great start. 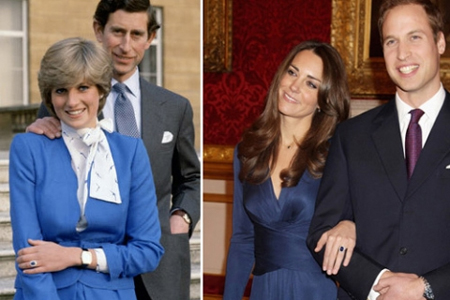 Princess Diana had flawless style, as does Kate Middleton, and both have set trends across the world. From their amazing hats to couture gowns, their looks have been admired by all. Kate Middleton’s style is a little more accessible to the general public, as she likes to mix high end fashions with more affordable favorites, wearing clothes from Shop Bop and Temperley London. You can certainly see the similarities in the engagement pictures below of Prince William and Kate Middleton and Princess Diana and Charles. Of course, Middleton is wearing the same blue sapphire engagement ring that Princess Diana wore.

Princess Diana was a huge supporter of charities and worked hard in her life to draw attention to those causes she believed in and supported. Kate and Prince William are following along the same charitable route by creating a royal wedding charity fund in which people donate to a charity instead of buying them wedding gifts.

Others say that Princess Diana became more famous than the other members of the royal family, however, Middleton will be perceived more as the “devoted wife” than a celebrity in her own right.

“She (Diana) had this compassion of a nun but the looks of a supermodel. We’ve yet to see if Kate’s going that way. I suspect maybe not, I think maybe she’ll be more of a support to Prince William and less of an individual in her own right,” said The Sun royal photographer Arthur Edwards.

“Diana hailed from an enormously privileged, aristocratic, old English family. Kate comes from a family that descends from working class mining stock. In many ways, she had a much more modern upbringing,” added Claudia Joseph, author of Kate Middleton’s biography, Kate.