Is Russell Brand a leading man? Can he carry a film? We’ll weigh in as his movie Arthur is set to premiere in theaters April 8.

As he mentioned in the opening monologue of Saturday Night Live, Russell Brand is far more famous in England than he is in the United States. He’s been a drug and sex addict, a controversial television host and stand-up, and he’s been very publicly fired more than once. American audiences were introduced to the outspoken star in the comedy Forgetting Sarah Marshall, where Brand played the rock star boyfriend of Kristen Bell’s Sarah. 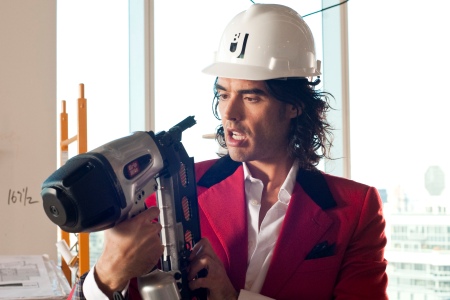 He wowed us with his easy comedy and handily stole the film, but no one here had really ever heard of him before. Since then, he’s hosted an awards show on MTV, married pop princess Katy Perry, starred in Get Him to the Greek and The Tempest and popped up all over the news. He’s clean, he’s happily married to Katy Perry and he’s one of the funniest people I’ve ever had the pleasure of interviewing.

But is Russell Brand a leading man? Despite mixed reviews of his remake of the ’80s film Arthur, I would say yes. Brand’s…um, brand of comedy and his ease in tossing off lines that make you laugh until it hurts, combined with his willingness to deal with the darker parts of his personality (he tackled his drug and sex addition in Greek) are just plain pleasing to watch. It’s his openness and sheer genius at improv that guarantee you’re going to want to see more of him. He’s certainly never boring.

And about those mixed reviews…no one is going to remake a Dudley Moore film without getting picked apart. Let’s be honest. Most people have such a reverence for this particular film that anyone else in the lead role would have them shunning the theater. They’re going to see Russell. How many of you have been heading to bed until you heard his name mentioned as an upcoming guest on a late night talk show and decided to stay up?

You want to see what he’s doing next. You want to hear how he embarrasses the ladies of The View. You want to hear all about his life with Katy. You know you’ve read all the stories. So give us your feeling about Russell Brand. Is he leading man material in your eyes? Is he the reason you’re going to see Arthur? Did Brand make a convincing Easter Bunny in Hop? Weigh in below.