Arthur famously finds love between the moon and New York City and in the update of the 1980s classic, which starred Dudley Moore and Liza Minnelli, Arthur is played by Russell Brand and the Liza character is embodied by newcomer Greta Gerwig. Gerwig utterly charms as the woman who teaches Brand’s Arthur what love and life are all about.

Greta Gerwig always knew she wanted to be an actress. You can imagine her thrill when she was cast opposite Russell Brand as the love interest who has him forfeiting hundreds of millions of dollars to be with her instead of Jennifer Garner’s character, who is his mother’s choice. Gerwig must have a spark that shines. The actress has “it” in droves. When we first meet her character Naomi, Arthur literally stumbles on her appreciation for New York City history. 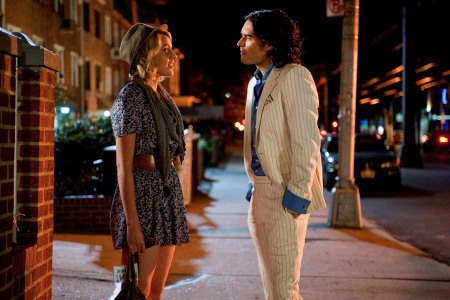 As the grounded, woman of the city character, Gerwig scored the role by leaving her co-star and executive producer wanting more. “I was sad when she left,” Brand told us in our Arthur interview.

Gerwig greets us at the Beverly Hills Four Seasons for an exclusive chat about how a girl from Oregon found her way to Hollywood via living in New York City.

SheKnows: Did you see the original Arthur?

Greta Gerwig?: Yeah, I did. Strangely I’d rented it a month before I got a phone call saying that they were doing a remake and that they were interested in me auditioning. So I had just seen it and it felt fortuitous.

SheKnows: What were your initial thoughts when you first saw the Dudley Moore version?

Greta Gerwig?: I loved it. It’s strange. It doesn’t seem like movies of today at all and the takes are weirdly very long. They just let him (Dudley Moore) roll in it. In a way, it’s very observational. I like that kind of framing — a completely strange but totally entertaining movie. I think it works against all odds. I think because Liza and Dudley are so great and it has a sweet chord to it, it’s got this really human feeling to it.

SheKnows: Central to the success of this film would be the chemistry of the leads and you and Russell have that in spades. What was it like having just seen Dudley and Liza’s fantastic screen presence? 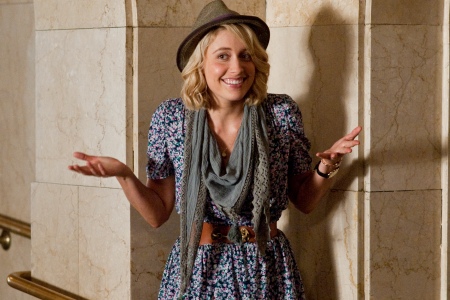 Greta Gerwig?: What ended up being in the film evolved with the way that we seem to work best together. The script was really, really funny and great.

SheKnows: I feel like Russell is the type of actor that can go off script at times and if so, did you find that a nice challenge to keep you on your toes?

Greta Gerwig?: Yeah, he’s an extreme improviser but he also actually, interestingly, he has the ability, because he’s a standup and stand-ups are great at risking on material but they’re also great at scripted material. Sometimes he would find something in improv and he’d be able to re-create the joke again so it didn’t have that quality of, “If you didn’t get it, you’d never get it again.” He’s honed his ability to repeat spontaneity.

SheKnows: Arthur is a New York story and as someone who lived there, was it a source of pride to be making a true New York story?

Greta Gerwig?: Yes, incredibly so. I went to college there! When I auditioned, I loved Russell the instant I met him. I hadn’t met him before. But there was an element to it where I felt, “I live in New York, I understand this.” I’ve been poor in New York. I know that feeling and felt that I had an extra level of understanding. Sometimes the part’s yours for a reason. The first day on the set, the teamster who drove me to set had driven on the original Arthur and he had the original plaque card on the front of his car. It’s such a New York movie. So, of course the teamster who was a teamster for 35 years worked on the original movie [laughs]. The whole thing felt special.

SheKnows: Did it feel kind of fateful for you? 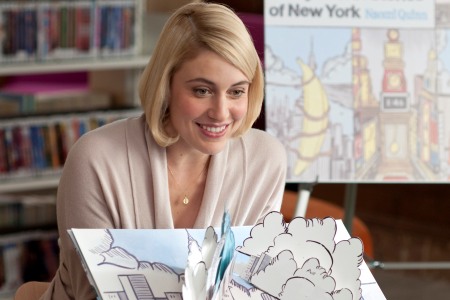 Greta Gerwig?: It was kind of fateful for me. I was so grateful they cast me and worked with me. I’m not tooting my own horn, but I think it also felt important because I’m not as famous as Helen [Mirren] or Russell or Jennifer — that seems right for this movie. I am actually an outsider in that way and so it seems right that I am different from their world.

SheKnows: You mentioned Jennifer Garner and in the few scenes you had with her, there was this total crackle to it. Your character wasn’t very confrontational with Jennifer’s, but you didn’t back down.
Greta Gerwig?: I sort of felt truly strong people don’t fluster. They don’t show you how strong they are until they’re pushed because they don’t need to because they’re actually strong. So that’s how I always felt about Naomi but you’d never guess she had a core until you poke and then you realize, “Oh my goodness, she actually does know what she’s doing.” That was an important element to me in the character. Yeah, Jennifer is so sweet as a person and so unlike that. She really could stare daggers at me and it was intimidating but she was so different in life. She took me under her wing. She taught me how to stand on the red carpet. She gave me a little, “Here’s what you do, this is how you stand,” and it was the opposite of how it was in the film but yeah, she was scary. She was so put together and so intimidating. 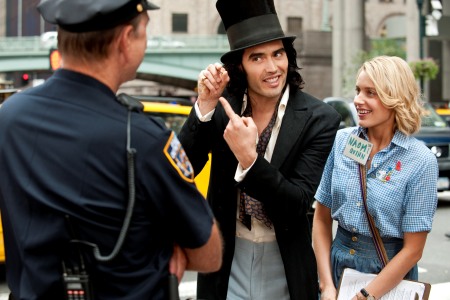 SheKnows: Speaking of brilliant, I wanted to ask you about Russell. He’s obviously been through a whole lot and his character in this film is also an alcoholic. Did he ever approach that and how he was going to handle that or was that something he kept to himself?

Greta Gerwig?: He takes substance abuse very seriously. There was a real respect for how hard it is, especially later in the film — the AA stuff. It’s very true for him. He’s so appreciative in his life of the people who’ve helped him from the darkness of addiction that he wants to be very careful with it. He wanted to make it real. Russell is not embarrassed and he’s written books about it. He doesn’t have a “I don’t talk about it” attitude. He’s very open about it and I think that’s why he empathized with the Arthur character in the movie.

SheKnows: How do you feel about the Barnard University theater program and what that program did for you?

Greta Gerwig?: Barnard changed my life. I grew up in California. I feel like any development I had intellectually, artistically or just feeling that I was able to do the things I’ve done, is all due to Barnard. I want to give them money, they’re so great [laughs]. I think women’s colleges are really special too. They’re so important to the fabric of our education system.