The Today show may be in for some big changes as co-anchors Matt Lauer and Meredith Vieira are rumored to be leaving the hit NBC morning show.

Matt Lauer is rumored to be leaving the Today show after 13 years as the co-host of the hit NBC morning show. His contract expires on December 31, 2012 and sources tell Entertainment Tonight that he plans on moving on. 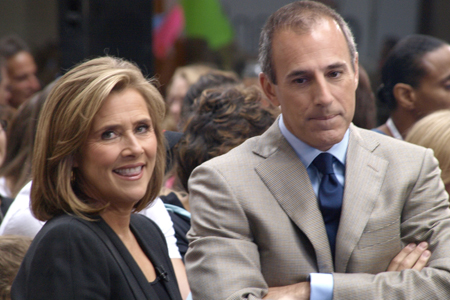 The 53-year-old has been a co-anchor since 1997, taking over for Bryant Gumbel. Is it the early morning schedule or long hours that are causing Lauer to opt out? Sources say that he has other plans, including a show with Katie Couric and her former Today show executive producer Jeff Zucker.

After 14 years on the Today show, Couric left for CBS Evening News — and is rumored to be leaving that post by this spring.

As far as Meredith Vieira, she will reportedly be leaving the Today show in September, as she has “grown tired of the show’s demanding early morning production schedule.”

NBC execs are remaining mum on the changes, only saying: “The Today show anchors are currently under contract and firmly in place.”

Tell us: Would you like to see Matt Lauer and Katie Couric back on-air together?

Who should replace Matt Lauer if he leaves the Today show?