The Vampire Diaries is back with Know Thy Enemy this week, but that also means the countdown to the finale is on.

The Vampire Diaries is nearing its final six episodes of the season and with the return of Isobel and the introduction of Klaus looming over Mystic Falls, it’s bound to get bloody. 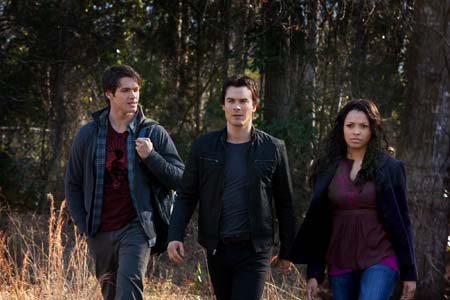 The Vampire Diaries left us on the edge of our seats back in February with the return of Isobel. Elena (Nina Dobrev) and Jenna (Sara Canning) were both rattled when they came face-to-face with the vampire vixen in the final moments of the episode — Elena because she didn’t want to see her biological mother and Jenna because she thought her boyfriend’s wife was dead.

That’s not all! Matt (Zach Roerig) found out Caroline (Candice Accola) was a vampire and Jonas was taken out by Katherine (also Nina Dobrev). We know, the excitement is almost too much to handle!

Now that everyone’s caught up, it’s time for an all-new episode. On this week’s episode, Know Thy Enemy, Alaric (Matt Davis) and Elena figure out Isobel’s return was John’s (David Anders) doing. After seeing the pain it causes Jenna, they unleash a world of hurt in the form of venom-filled words on Mystic Falls’ resident outcast.

Bonnie (Katerina Graham), Damon (Ian Somerhalder) and Jeremy (Steven R. McQueen) team up to crack the spell that they’ll need to channel the power of the Bennett witch’s ancestors.

Caroline, clearly devastated, struggles with what to do about Matt now that he knows she’s a vampire. Will he continue to think she killed his sister? Stefan (Paul Wesley) and Damon stumble upon a new secret weapon that’s right under their noses.

Are you excited for The Vampire Diaries to return after a month-long break? Know Thy Enemy kicks off what will be a stellar final six episodes! Don’t forget, everything is leading up to Klaus’ big reveal in the next few episodes. Don’t miss a moment of The Vampire Diaries.