The Ghostface Killer is back and so is Sidney Prescott. Neve Campbell returns in Scream 4. Campbell joins former cast members Courteney Cox and David Arquette in the latest offering in the Scream franchise. 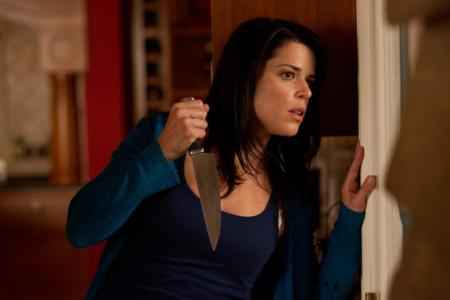 Neve Campbell is back as Sidney Prescott in Scream 4 along with original co-stars Courteney Cox and David Arquette. (Does their split make anyone else as sad as it makes me?) Now the author of a self help book, Sidney heads back to Woodsboro on the last stop of her book tour. The surviving gang’s all here, including the now married Sheriff Dewey (Arquette) and Gale (Cox). We also get to meet her young cousin Jill (Emma Roberts.)

But you know what happens when the surviving members of a horror film get together. That’s right. People die. Ghostface Killer is back, and he’s slicing and dicing his way through the group with his (or her) take on horror movie remakes. Timely, no? Joining the cast is Hayden Panettiere, Alison Brie, Anna Paquin and Kristen Bell.

We’ve missed Neve, who hasn’t been on the big screen in a few years. And it’s nice to see her back in a beloved role.