Everyone is talking about the new HBO series Game of Thrones. So what is it about? We’ll get you up to speed. 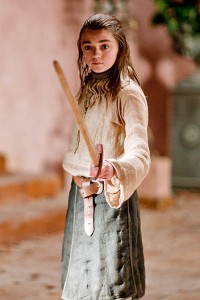 Do you like sword fighting? Are you a fan of Lord of the Rings and films and shows based on fantasy novels? Do you love Sean Bean with the same fervor I do? Then this show is for you.

Game of Thrones is based on the wildly successful epic fantasy series, A Song of Ice and Fire, by George R. R. Martin. It’s the story of the kingdom of Westeros and the struggle for the throne. In this universe, summer lasts for years and, as the motto of the House of Stark states, “Winter is coming.”

Political intrigue abounds as the seven noble families of Westeros struggle to take the throne. The main three, the Lannisters, the Starks and the Baratheons, are the front runners. When we begin the series, Robert Baratheon (Mark Addy) sits upon the throne made of swords. He and his army stole the seat from House Targaryen and the mad king, leaving his son Viserys (Harry Lloyd) and daughter Daenerys (Emilia Clarke) the only survivors. These children of the dragon (oh yes, there were dragons, though they are merely giant skulls now) are on the run and trying to gain the support of the fierce horse tribes. Jason Momoa plays Khal Drogo, the leader of the tribe.

King Robert is married to Cersei Lannister (Lena Headey), a scheming woman whose relationship to her twin brother Jamie (Nikolaj Coster-Waldau) is…well, rather close. Their older brother Tyrion (Peter Dinklage) is a little person (and one of my favorite characters) and smarter than both of them combined.

Then we have the Starks. Ned (Sean Bean) is the ruler of the northern land of Winterfell, holding the area for the king. He had a loving relationship with his wife Catelyn of House Tully (Michelle Fairley), and they have five children, each of whom has quite the story of their own. (I don’t want to spoil that for you.) Ned has another child, a bastard named Jon Snow that he brought home after the war.

There are dire wolves, zombie-like creatures and political and sexual intrigues — it’s one of the most highly anticipated shows of the year. Want to see what I mean? Check out the first fifteen minutes of the show on HBO’s website. Game of Thrones premieres April 17 and runs for ten weeks. Fans of the books shouldn’t worry. Martin says it’s a pretty faithful adaptation.

So are you excited for the show? Let us know below. Winter is coming!