Hunger Games finally has its Peeta and Gale. So, who are the lucky actors to star across from Jennifer Lawrence in the wildly anticipated film version of the book series? 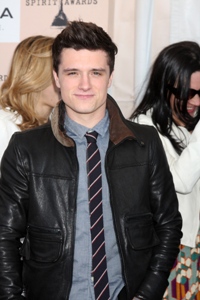 Hunger Games has to be one of the most highly anticipated films in recent memory. Well, outside of the superhero films, that is.

Based on the hit young adult novel by Suzanne Collins, it’s the story of Katniss Everdeen, who will be played by Oscar nominee Jennifer Lawrence. According to the press release, The Hunger Games chronicles a dystopic Capitol which requires its twelve subjugated districts to pay tribute in the form of a teenage boy and girl, forced to participate in the annual “Hunger Games,” a fight-to-the-death live televised event.

Katniss Everdeen’s little sister is chosen in the lottery to participate and Katniss volunteers to take her place.

The casting of Lawrence was huge news in the movie world. And now, we know who will portray Peeta and Gale. Peeta is Katniss’ rival for the win who publicly declares his longtime feelings for her. The sought after role of Peeta will be played by Josh Hutcherson from the Oscar nominated film The Kids Are All Right.

Gale, the boy with whom Katniss shares a “transcendent bond,” will be played by Liam Hemsworth from The Last Song.

These book rights have been sold in 41 countries and it’s sold over three million copies in the U.S. alone. It’s also the first in a trilogy, so expect more than one film in this franchise.

We’d love to hear what you think of the casting. Are these the faces you pictured in your head? Let us know below. Hunger Games will be released by Lionsgate on March 23, 2012.