After Angelina Jolie showed off her new arm tattoo, many (including us!) wondered if the actress and Brad Pitt were adopting again. Angelina’s new tattoo has been deciphered — get all the details here! 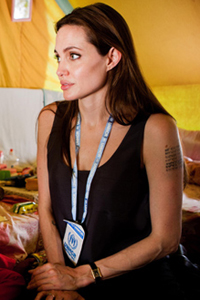 Angelina Jolie caused a buzz when she showed off a new arm tattoo that had coordinates, just like the birthplaces of her six children. One source said the coordinates were from Algeria, speculating that perhaps Angelina and Brad Pitt were planning on adopting an Algerian child.

As it turns out, the coordinates are not from Algeria, but from Brad Pitt’s birthplace of Oklahoma!

“She got the seventh line right around the time she and Brad moved the kids back to LA,” an inside source reveals.

Angelina has decided to agree with Brad’s request to settle down in California, but “demanded a permanent commitment — the tattoo, which signifies family unity.”

Joining the last line with the longitude and latitude of Oklahoma, she also has the coordinates of Cambodia for Maddox, Vietnam for Pax, Ethiopia for Zahara, Namibia for Shiloh and two in France for twins Vivienne and Knox.

This is not the first time that Angelina has gotten a tattoo in tribute to a man. She had a Billy Bob tattoo on her left upper arm with a dragon below it for her ex-husband Billy Bob Thornton. She had it removed after they divorced in 2002.

“Usually all my tattoos came at good times. A tattoo is something permanent when you’ve made a self-discovery, or something you’ve come to a conclusion about,” Jolie once said of her affinity for tattoos.