Excellent! Keanu Reeves says a Bill and Ted sequel script is “weeks away.” We’ll give you the scoop.

As much as I love the “Sad Keanu” meme, I’m happy to report some new Keanu Reeves news. And this couldn’t have made me happier! 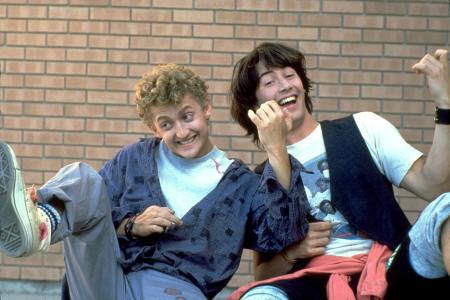 Reeves just told MTV News that the promised sequel to Bill and Ted’s Excellent Adventure is “weeks away.” Back at the 2010 Toronto Film Festival, Reeves said this was on its way and that Alex Winter and writers Chris Matheson and Ed Solomon were on board. “We’re trying,” Reeves told MTV back then. “Alex and I are still friends and we’re talking, and we’re talking to Chris and Ed.”

“They’re going to try and see if they can write something. To me, I’d love to play the role. I’d love to work with Alex and Chris and Ed again,” Reeves continued. “We’ll see what they do — if it’s a film that can stand up on its own. And I’m meeting people now, they’ve shown the film to their kids. We just seek to entertain, and if that could be something that could be worthwhile on its own…”

During an interview for his new film with Vera Farmiga called Henry’s Crime, Reeves reported that Bill and Ted fans should be thrilled. “I believe the writers are six weeks away from a draft. No pressure guys!” Reeves said.

We even got some plot details! It takes place after the second film, Bill and Ted’s Bogus Journey. Reeves said, “When we last got together, part of it was that Bill and Ted were supposed to have written the song that saved the world, and it hasn’t happened. So they’ve now become kind of possessed by trying to do that. Then there’s an element of time and they have to go back.”

Are you guys excited for this? Are you old enough to remember the old ones? Let us know below, and in the meantime, be excellent to each other.