It looks like we’ll have to wait a bit longer to get a new fix of our fave fist-pumping guidos and guidettes: The Jersey Shore production start date is being pushed back a few weeks.

It looks like Snooki, The Situation and the rest of the Jersey Shore clan won’t be heading to Italy in May like we thought. It turned out Italians aren’t down with the GTL and don’t want the fist-pumping troop there. 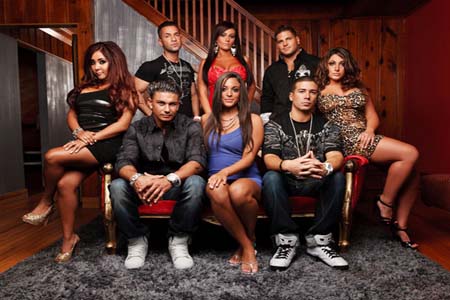 A source told E! News that shooting is delayed “for at least a few weeks” because MTV is having trouble securing the proper permits to shoot in the country.

However, a rep for the Italian Film Commission says that’s not true.

“We haven’t been contacted by anyone from MTV and any location manager for the show. Generally speaking, Italy is a film-friendly place,” the spokesman said. It turns out that the commission has actually reached out to MTV News to help them secure the proper permits.

So, what’s the deal? Does it have to do with backlash from the Italian people?

“They embody the worst stereotypes of Italians, multiplied by thousands and Americanized,” Italian writer Roberto Del Bove wrote after the plans were unveiled.

One commenter even said that Osama bin Laden had “a point” when he attacked the U.S. on September 11.

Whoa. That’s some anti-American sentiment there.

However, we think the real reason for the Jersey Shore pushback is the time-old problem: money. E! News reports that some cast members haven’t signed their contracts yet.

Yeah, we know they command thousands to make appearances at places like Rutgers University, but they should remember that fame is fickle and we’re sure tons of guido-wannabes are dying to take their places.

A source went on to tell E! News that the cast might only vacation in Italy once the papers are signed and spend the rest of the time in Seaside Heights. We’re hoping that’s not the case — what do they still have left to do at the Jersey Shore? Seriously, we can’t take another season of constant fights between Ron and Sammi.

What do you think? Are you upset that the Jersey Shore clan won’t make it to Italy in May?