The second contestant to be eliminated from season 12 of Dancing With the Stars was talk show host Wendy Williams. No tears were shed on her part — in fact, she was “pleased” to be going home.

Wendy Williams and her partner Tony Dovolani were the second couple to hang up their dancing shoes on season 12 of Dancing With the Stars. Last week’s eliminated contestant, DJ Mike Catherwood, seemed disappointed, however, there was no disappointment from Williams, who said she was ready to leave dancing behind. 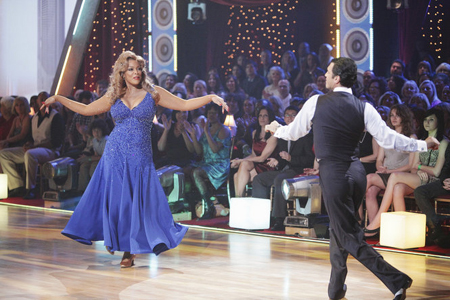 “I don’t feel like I deserved any of the scores that I got, but still I am ironically pleased to be going home,” Williams told People. “I have neglected personally [my] 10-year-old son, I have a 12-year marriage and I’ve got a talk show that demands my attention.”

Her elimination was not a huge surprise, as her foxtrot on Monday only earned 15 out of 30 points, putting her at the bottom of the scoreboard.

What will Williams miss about being on the show? She said “craft services” and her partner Tony asking her to stand up straight. “As a woman of a particular age, it’s going to help me as I approach osteoporosis. This was a fun experience, but I think it’s time for me to go home.”

Despite the fact that Maksim Chmerkovskiy almost dropped Kirstie Alley during their performance after his “thigh gave out,” the couple was deemed safe.

Live performances on the show included One Republic and Disney star (and girlfriend of Justin Bieber) Selena Gomez.

Tell us: Did you think it was time for Wendy Williams to go home?

Video: In case you missed it, check out Maksim falling with Kirstie Alley