Russell Brand is a very bad boy. In the summer of 2010, the extraordinarily talented comedic actor sought to illustrate a point and wound up his arm and slapped this writer across the face. Stunned, he kissed my cheek. That kind of spontaneity of response is why American and global audiences are falling in love with him as much as Katy Perry did!

Russell Brand landed in Los Angeles to discuss his latest potential hit movie, Arthur. The revamp of the 1980s classic features Brand as a lovable billionaire who is lost in life without any prospect for a fruitful future and Helen Mirren stars as his faithful nanny. When his mother threatens to cut off his millions unless he marries, Arthur decides to marry Jennifer Garner’s Susan. 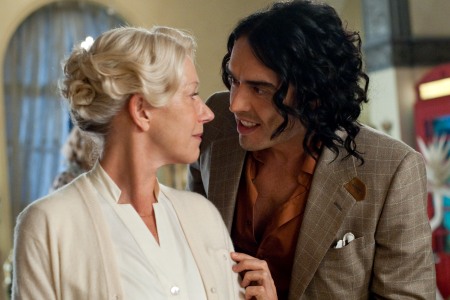 With all his excesses and perceived fullness of life, Arthur is without romantic love. Then, literally Brand’s Arthur stumbles on what could be the love of his life. Enter Greta Gerwig’s Naomi and soon audiences see Brand in a new light. As Arthur, he comes out of his strictly comedic acting shell and gives a performance that is equally treasured and triumphant. He has done the impossible — made us think of someone else in an iconic role beyond the person who made it famous.

SheKnows: First of all, you have said that your life changed when you fell in love with Katy. How so?
Russell Brand: Like in Arthur, I think love has an incredibly transformative quality. I think the first thing you do when you fall in love is that you recognize that you’re not the most important person in the world and your focus becomes another person. The reason why the film resonated with me is because I think Arthur is a person without direction and love gives him that.

SheKnows: Arthur is an alcoholic, yet how it’s dealt with in this film is slightly different than the original. Also, was it hard to play an addict when you yourself are in recovery?

Russell Brand: Yes, I’m such a thorough actor that I did two decades of research just to make sure it was a 100 percent right. The difference of course is that Arthur is a fictional alcoholic and has much more latitude for clowning and fun and often his adventures don’t lead to broken glass and howling women. Although he is, of course, arrested at the beginning of the film. It was very important that we established a context where the alcoholism was humorous and good fun, but was not irresponsibly portrayed. This is 2011 and it is important to see a resolution to the problem of alcoholism and that’s one of the aspects, as a recovering alcoholic myself, I was particularly happy with how that was rendered.

Brand goes between the moon and NYC

SheKnows: So tell us, what was it like wearing the real Batman suit George Clooney wore? 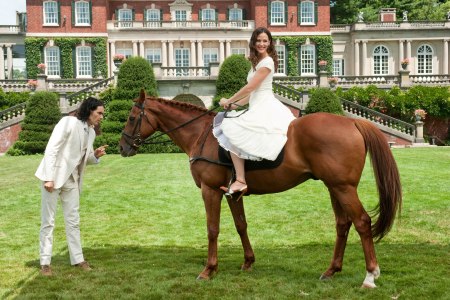 Russell Brand: I enjoyed wearing the suit because it had Clooney musk in it and it had the pheromones of George Clooney and I’d like to think that I may have absorbed them.

SheKnows: At one point, you have to run around in your underwear. Are you comfortable with that?

Russell Brand: I felt very shy and embarrassed about it as a matter of fact, but they were such lovely underpants that I was kind of grateful. They were custom made [laughs].

SheKnows: Do you think your life mirrors Arthur’s in the sense that you have fallen in love and it changed your life?

Russell Brand: This is why this film resonated so strongly with me and why I’m so happy with it. My life has been changed by falling in love, so I know that whilst that is a romantic idea and in this case fictional, it’s something that has happened to me. That’s why I’m so enamored of this story.

SheKnows: Greta Gerwig is who you fall in love with in the film. Did you two find chemistry immediately?

Russell Brand: That happened very naturally. We saw loads of different actresses which was alright but because, of course, I was on the way to getting married then, I couldn’t really enjoy it like in the good old days where auditions had a rather primal quality [laughs]. We did the audition with Greta (Gerwig) and afterwards I was sitting quietly — it must have been the last casting of the day — and I was all quiet and Jason (Winer, Arthur director) asked me what was the matter. I said, “I feel sad now that she’s gone.” It was because I had enjoyed playing with her so much. She had such a brilliant imagination and is a great improviser and has a wonderful understanding of comedy. She has a wide range of ideas with peculiar choices, but good peculiar, in a magical way. 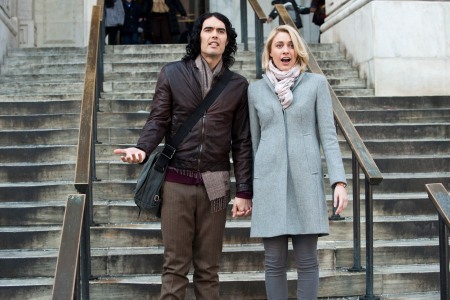 SheKnows: How do you see Arthur charming audiences in 2011?
Russell Brand: Arthur has everything. He has all the money in the world, yet he is lonely, yet he is unhappy. I grew up poor, I didn’t have any money, now I have some money. But the greatest poverty one can have is to be poor in one’s heart and through falling in love, Arthur is truly happy. He discovers purpose. All of us know that money is transient. Its pleasures are illusory. The happiest moments in our life are not, “I got a new hat or a wonderful silvery object,” but it’s when you connect with another human being.

SheKnows: Speak a little bit about your personal relationship with Helen Mirren. You two seemed to hit it off.

Russell Brand: We had a wonderful relationship. I’m a bit in love with Helen. I am.

SheKnows: [Laughs] Now that you have walked down the aisle, do you have advice for Prince William and his bride to be, also named Kate?

Russell Brand: I don’t go around giving advice to the British royalty. They will chop my head off!