Arthur arrives back in movie theaters, starring Russell Brand and Helen Mirren, in an update of the Dudley Moore classic that won an Oscar for Sir John Gielgud. The Arthur story has been brought to the 21st century and has been inspired by our challenging times.

Arthur also includes a role reversal in some ways with Dame Helen Mirren portraying Arthur’s nanny whose charge it is to raise a spoiled billionaire who bathes in his financial freedom at the expense of his future. Arthur is a film designed solely for its lead — Russell Brand. But, it is the presence of Helen Mirren, stepping into a fellow Oscar winner’s shoes as Arthur’s caretaker, that makes Arthur 2011 such a worthy modernization of a beloved classic. 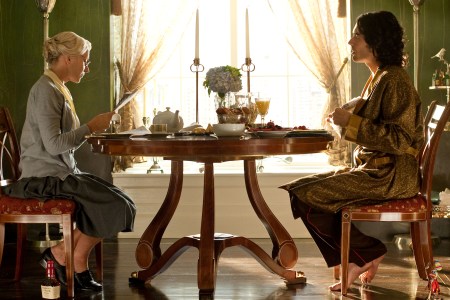 Helen Mirren recently talked about Arthur and how her rare foray into comedy has inspired her. One bit of icing on the cake for Mirren in tackling Arthur was her cherished friendship with Brand that developed while filming.

SheKnows: In Arthur, you get to exhibit behavior that is hardly becoming of a Dame such as yourself. You punch Russell! He slapped me once, tell me…how did that feel?

Helen Mirren: Punching Russell was great, but the best thing was being taught how to punch by Evander Holyfield who was my personal trainer on the set. I went up to him and he’s such a gentleman. He is the champ. He is a big guy and quite scary. So, I went up to him and said, “Evander, I’ve got to punch Russell, would you show me how to do it please?” He said, “Sure,” and he gave me a little training.

SheKnows: First off, it seems you and Russell really hit it off.

Helen Mirren: He was in his trailer all the time and when he did come out, he was always surrounded by minders. He wouldn’t speak to anyone [laughs]. Okay, that was completely untrue.

SheKnows: Dame Mirren, what was it about the role of Russell’s nanny in Arthur you found compelling, especially with John Gielgud so iconically playing the original Arthur’s butler in the early ’80s?

Helen Mirren: I did it because I met Russell and I sat on a sofa opposite him for a couple of hours and he just blew me away. I kind of worked with him on The Tempest, but not a lot. We hadn’t really spent time together. Russell told me about this film and he totally seduced me, the way he does, you know [laughs]. I defy any male, female or child to spend two hours with Russell and not be completely charmed and just say, “Yeah, fine. I will do whatever you want.”

SheKnows: Have you done many comedies? Because Arthur is hilarious! 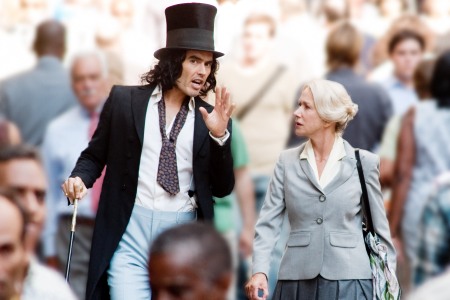 Helen Mirren: [Laughs] It was an education for me, as much as an education I was trying to give to the character, but mostly I was the one who was learning stuff. I learned so many things. I’ve never done a film that is called a comedy before. It was one of the reasons why I wanted to do the film. I was very lucky that I was working with such brilliantly experienced people in the world of comedy. So it was my education.

SheKnows: Given Arthur’s “I need to waste money” attitude, I was curious, what was the most extravagant purchase you made with an acting paycheck?

Helen Mirren: A castle in Puglia. My husband (acclaimed director Taylor Hackford) and I bought a castle in southern Italy. It’s like turning on the taps full and money just pours out into the desert. It’s not finished. It will be beautiful. It’s not really a castle, it’s a farm house. It’s got a little hole that you can pour boiling oil out of. Puglia was being invaded all the time — it’s a fortified farm house.

SheKnows: Given that, what do you say to people who might be struggling in these economic times and have to seriously think of whether they want to part with hard-earned money to see a movie?

Helen Mirren: I think [Arthur] is a fantasy we all have. What would we do if we had a billion dollars? That’s why when the lottery gets really big, up to 40 or 50 million dollars — I go out and buy a ticket [laughs]! Because, you think, “Maybe I will win.” You fantasize about what it would be like to have millions and millions of dollars. We all do that and here we can see what happens when you have millions of dollars. So I think it’s a fantasy that we all carry within us. We all are dreamers.

SheKnows: Helen, you have earned many an esteemed honor. How does having your foot and handprints on a legendary Hollywood thoroughfare rank in the honors department for you?