An unnamed source claims Twilight lovebirds Robert Pattinson and Kristen Stewart are “taking a break” from their real life romance. Could RPatz be back on the market? Is KStew still pining? Another unnamed source says, “They are still together.” 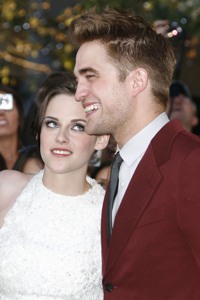 Here we go again! The Internet is afire with murmurings that Twilight stars Robert Pattinson and Kristen Stewart have hit a rough patch in their real life love affair — and there’s already another new outlet denying it. As usual, both stories rely on mysterious unnamed sources.

The hoopla started with British gossip rag The Mirror, which quotes an unnamed studio exec as saying, “Things have been a bit rocky for a while. They both have hectic work schedules, Rob in particular at the moment, and their phone calls were getting fewer and further between. They started to only see each other on set and began to drift apart until a general apathy developed.

“The excuses why they couldn’t meet up basically got weaker and weaker, and Rob figured they should officially cool things off and have some time to figure out what they each want.

“There have been a few tears but the pair remain friendly. Kristen is hopeful of a reconciliation once Rob has finished promotion for his latest movie. But as things stand, they’re on a break and just mates.”

Some of this does compute. The stars behind Bella Swan and Edward Cullen are indeed keeping busy with more than just shooting The Twilight Saga: Breaking Dawn. Pattinson is of course promoting Water for Elephants with newlywed Reese Witherspoon.

Stewart hasn’t been by his side On the Road (pardon the pun!), but recently made news for landing the part of Snow White opposite Evil Queen Charlize Theron in Snow White and the Huntsman.

SheKnows remains skeptical about this newest round of Pattinson/Stewart breakup buzz — and not just because Celebuzz came out with their own unnamed source as this very story was being written!

“They are still together,” this source says. “This is nothing new. They have been apart many times before. Rob and Kristen are both very supportive of each other’s careers.”

Sigh. This isn’t the first time we’ve heard Pattinson and Stewart “my source says/their source says” breakup rumors and assuming they’re not true, it surely won’t be the last.

Since the beginning of the Twilight franchise, Pattinson and Stewart have been paired off screen, broken up, moved in together, broken up, gotten married, broken up and so on.

Pattinson didn’t even confirm the relationship buzz until last February, when he admitted the fandemonium made things tough for them and in April, he made it clear that’s still a problem.

For the time being, however, Robert Pattinson and Kristen Stewart are still making headlines, for better or for worse.